The world is waking up to the failure of those in power in Uganda to respect the fundamental objectives and principles of the 1995 Constitution of Uganda (amended 2005). Attempts by Ugandan citizens to highlight this are being thwarted by the Supreme Court, which should be upholding the Constitution.

When the UN or EU reminds Uganda of its sovereign decisions to commit to international principles of human rights and the benefits they receive from a rule-based international order, Museveni complains about interference in internal affairs. The Constitution of Uganda outlines the principles of democracy; national unity and stability; national sovereignty, independence and territorial integrity; protection and promotion of fundamental and other human rights, including checks and balances among various organs and institutions of government; the right to development and the role of the people and of the government in balanced and equitable development; protection of natural resources on behalf of the people of Uganda; and various social, economic and cultural objectives; accountability, including that all persons placed in positions of leadership and responsibility shall, in their work, be answerable to the people.

The Government of Uganda wants the benefit of the international order, with membership of international organisations, WTO rules-based trade and Development Aid, but rejects its responsibility to submit to any international obligations, such as its own sovereign signature to the Universal Declaration of Human Rights, the African Charter on Human and People’s Rights, the African Charter on Democracy, Elections and Governance, and many others, including membership of the African Union, the UN and the Commonwealth of Nations with their respective principles.

The European Parliament in February 2021 recognised the context of Uganda’s position under its Constitution and international commitments and noted its concern over a number of breaches of basic human rights and democratic processes and the rule of law, before passing a resolution of 19 points for the EU Commission and Uganda to address. The Government of Uganda responded with a 10-page justification of its position.

While much of the Uganda Government’s response is plausible, it fails to address key issues, such as:

Overall the 10-page Uganda Government response fails to understand that sovereign decisions by Uganda to sign and ratify international treaties and declarations also involve obligations and reporting mechanisms for all parties.

Also on 18th February, President Museveni met with a European Union Delegation. During the meeting, he said that there is nothing in Africa or the world that we [Museveni and his Government] do not know and accused the EU of failing to understand Africa, of getting involved in Uganda’s internal affairs and of “misconduct and mishandling”, complaining that a partnership agreement to monitor human rights lacks genuine African-European Parliamentary collaboration. President Museveni asserted that the riots in November involved rioters attacking security forces with pangas and hammers, resulting in some being shot dead, although, three months on, he will now await more clarification on the deaths of 22 others.

The Government of Uganda’s patronising responses show that they want to present a reasonable face to the international community. However, Uganda security forces, including the Police, armed with guns, batons and sticks, continue to commit crimes against civilians, targeting journalists and any who have ever shown signs of supporting opposition parties, particularly the NUP party. The Supreme Court has rejected over 270 affidavits (written statements, videos and audio recordings) submitted by Bobi Wine. They also rejected his request that some of the judges should step down (recuse themselves) because of their close association with Museveni and lack of impartiality.

While Museveni and his allies may be losing international and national credibility by their partial and inadequate responses, their power base remains strong, enabling human rights abuses to continue under increasingly militarised governance and the weakening of the Constitutional rule of law and democracy. 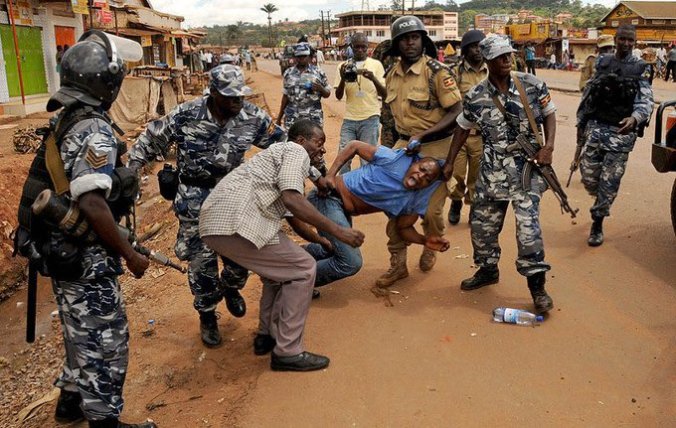 Candles in the dark

Each one of you who has signed and shared the petition on Change.org has helped to wake the world up. Some in the UK have also been writing to their MPs, asking for a response from the British Government. Questions are now being asked in Parliament although we await the outcome.

Journalists and opposition supporters in Uganda, mostly young people in their 20s and 30s, continue to report, investigate and appeal for justice using peaceful and legitimate means in spite of the daily reprisals and cruel attempts to silence them. The few who have managed to get out of detention have injuries and horrendous stories to tell while tortured bodies have been found dumped in forests, often unrecognisable. Thousands have “disappeared” without trace.

Ugandans have told me that the petition and each signature on it are like candles shining in the dark days of repression and suffering.

They are urging us to keep the candles alight to reveal the horror of what is going on – until the greater light of justice, peace and democracy once again takes over. The more signatures, the more candles there will be to lighten the darkness. So please continue to share, and shamelessly share again, the petition throughout the world and on all social media platforms, as many times as possible.

With the international media concentrating on news of human rights abuses in countries like Myanmar, Hong Kong and the Middle East, the general public around the world is unaware of what is happening in Uganda. Whilst I am very sympathetic and concerned about the fate of Princess Latifa in Saudi Arabia, I wonder why so many governments are taking steps on her behalf and yet hundreds of abducted young people who are being tortured and killed in unknown places in Uganda don’t attract any international concern, let alone action. Is it to do with wealth, power and position? Is it fair? Until the world starts to take action, it is up to ordinary people like us to fight (with non-violent means) on the behalf of Ugandans experiencing torture and death every day.

Sharing the petition repeatedly, as well as all posts and updates, will help bring Uganda into the spotlight and encourage international pressure.

And each extra person you encourage to sign (who in turn will share) is another small light in the darkness that people in Uganda are enduring and a sign that they are not forgotten.