I include in this section felting with wool (which our German friend, Sabine Bruns, taught me), sewing, weaving, knitting and rug-making.

I have knitted on and off over the years. My first big project was knitting a cardigan for Roger when we were students in the mid 1960s which he still has. I have knitted various children’s sweaters and identical cot blankets for the first baby each of our children had although sadly I have only poor photos of two of them. I am still in the process of knitting a large bed cover from squares – this time, I ‘bit off a little more than I can chew’ and am struggling to finish it!

Cardigan I made for Roger 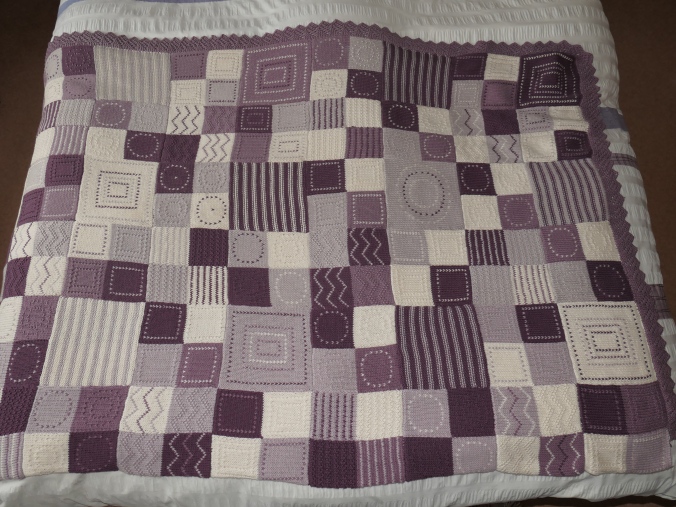 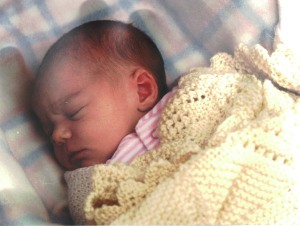 While we were saving up as students to get married in 1967, instead of going out, we bought a Ryagarn kit and made this shaggy rug together, working at opposite ends. A few years later, we made a second rug to our own design using left-over wool. They are made by looping and knotting lengths of wool through the holes of special rug canvases.

The process of felting takes a long time and is quite hard work! Other threads and fabrics can be incorporated or stitched on at the end.

2014: Pulling and laying out strands of raw, dyed wool 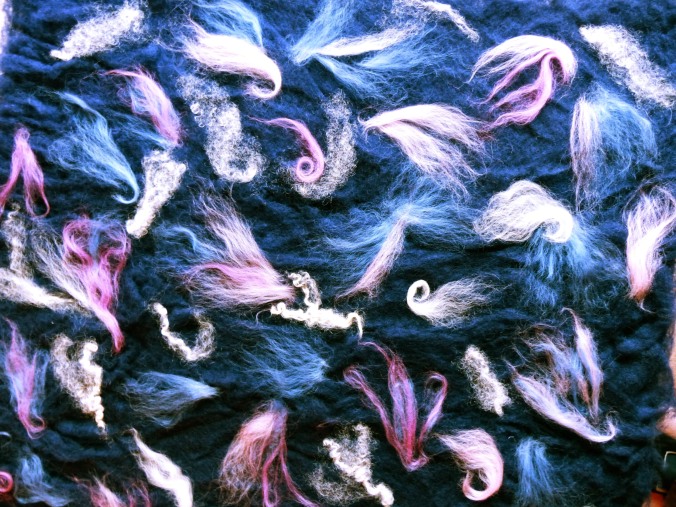 Soft raw wool lying on the blue base

Layers of wool ready to be felted

Spraying warm, soapy water all over the raw wool

It takes about two hours of hard work of rubbing and rolling the wet, soapy wool to turn it into felt 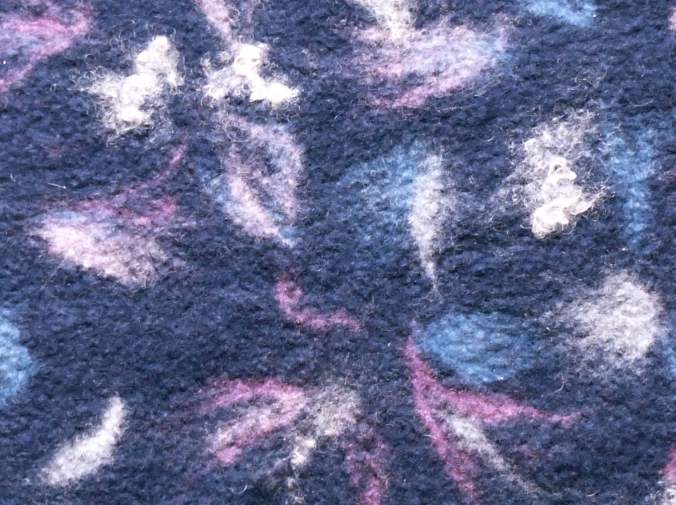 I made a dress for Amelia from this fabric in 2014

More felted fabric which I made in the same way

2006: Jacket I made for Libby from the felted fabric

Felting pictures on the walls in our craft room

Resurrection – a picture made by felting washed and dyed raw wool

View from Olio hill in Serere, Teso, Uganda. I have incorporated pieces of wood, twigs and moss.

This felting picture was inspired by Kandinsky and is a combination of one felting piece done by each of the grandchildren as well as me and Roger in 2015. I stitched them together and backed them before framing. 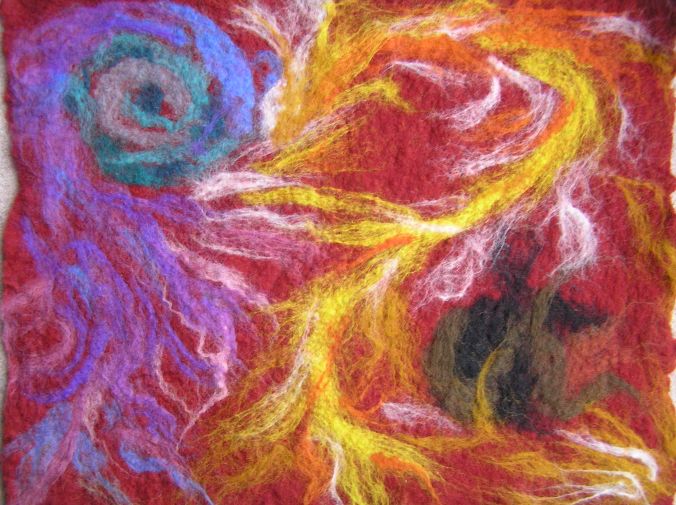 2019: Expression of God moving within me in felted wool

For an explanation of this piece of felting, click on this LINK. 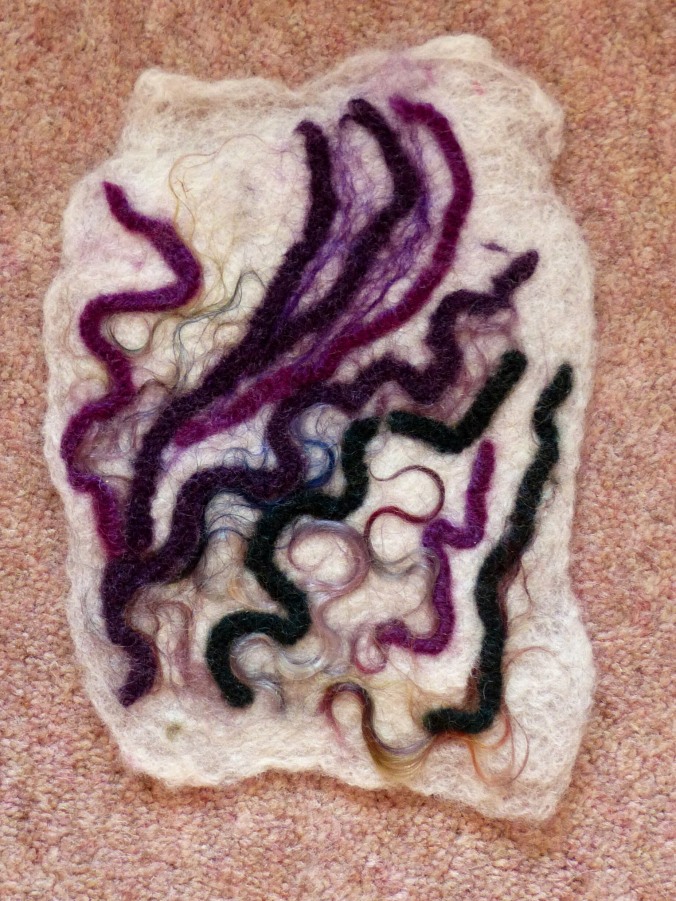 Felted balls cut in half

Mobile made of felted balls

One side of the wall hanging

Other side of the felting

In March 2020, along with millions of others around the country at the beginning of the Coronavirus Lockdown, I made a rainbow to stick in the front window. Instead of painting, I felted it and then stitched the words “Promise for a Better Future for the Whole World” in the appropriate colours so that they don’t stand out but can only be seen by those who look more closely. 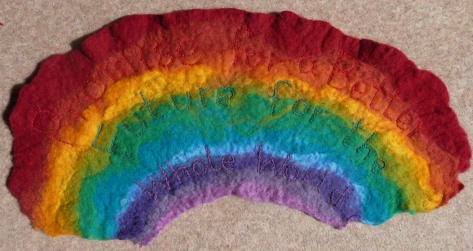 I like it that when seen from outsie, the rainbow is over our neighbours’ houses which are reflected in our window

Over the years, I have made countless clothes for all the family, as well as a number of bridesmaids’ dresses, most of which I don’t have photos of. I also made a set of Winnie the Pooh soft toys for the children, but only three remain.

I made these dresses and hairbands for Christmas 2006 for all five granddaughters (and the floral one below for Maggie, my Goddaughter in Teso, Uganda). I also made fleece gilets and hats for Sam and Adam.

2006: The grandchildren in the Christmas clothes I made for them. 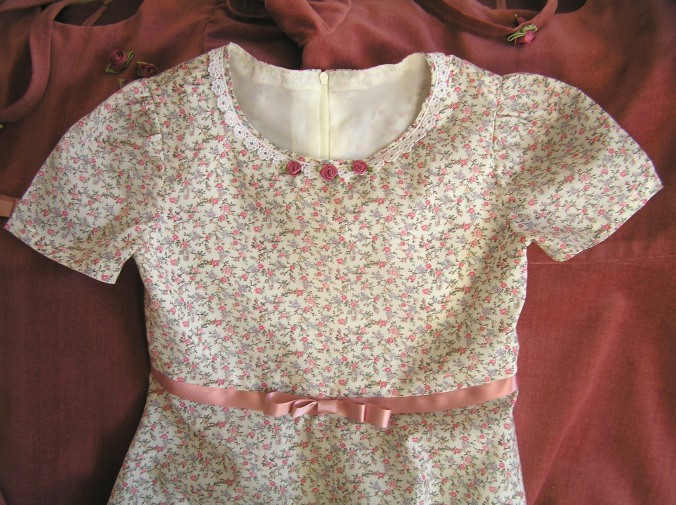 2011: Quilt and matching bear I made for Amelia (youngest grandchild) when she was born 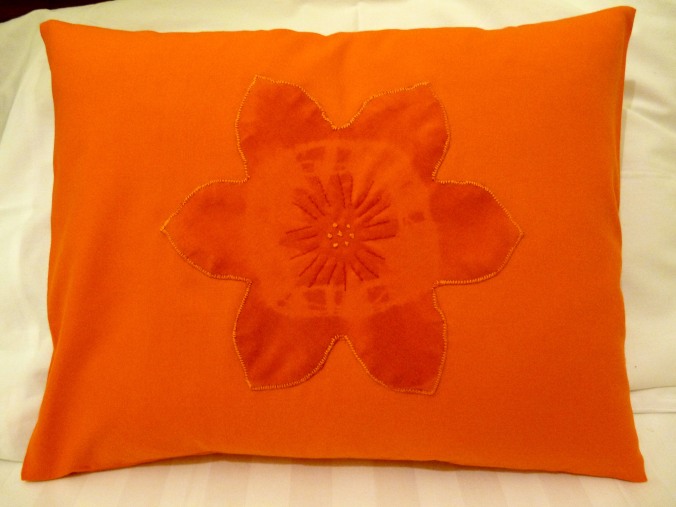 Appliqued flower I made from material I had tie-dyed 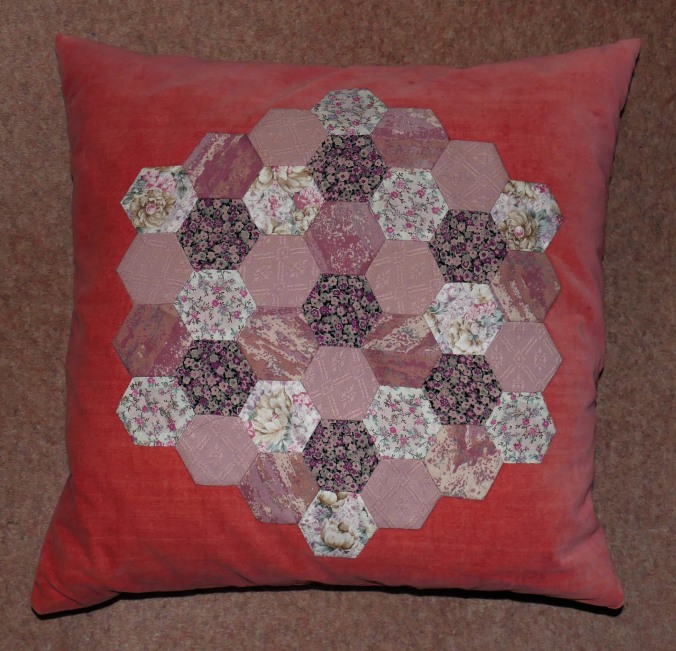 My only attempt at patchwork quilting

The family gave Roger an 8-shaft weaving loom for his 60th birthday in 2005. These rugs are Roger’s work, not mine! 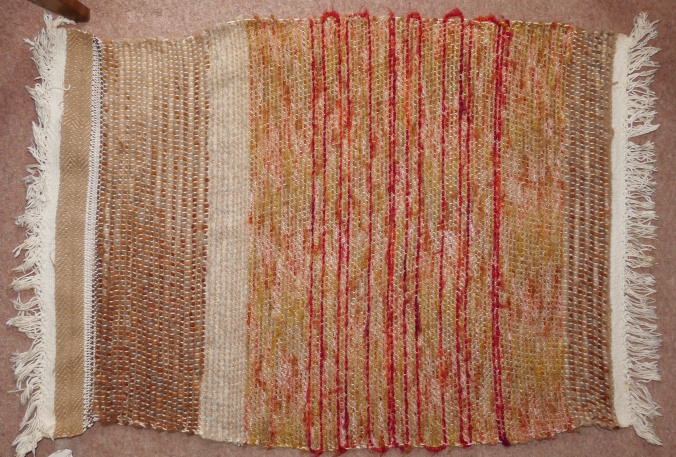 Roger and I went to a short weaving course at Loughborough University run by Emily Whitesmith and were then inspired to get going again on the 8-shaft loom which the family gave Roger for his 60th birthday.

Samples of weaving I did on the short course

We have been taking it in turns to weave enough fabric each to make cushion covers, experimenting with different patterns. Warping up was a somewhat complicated, very long and tedious task which required threading 600 very long fine strands through individual holes whilst keeping them untangled and all under the same tension! 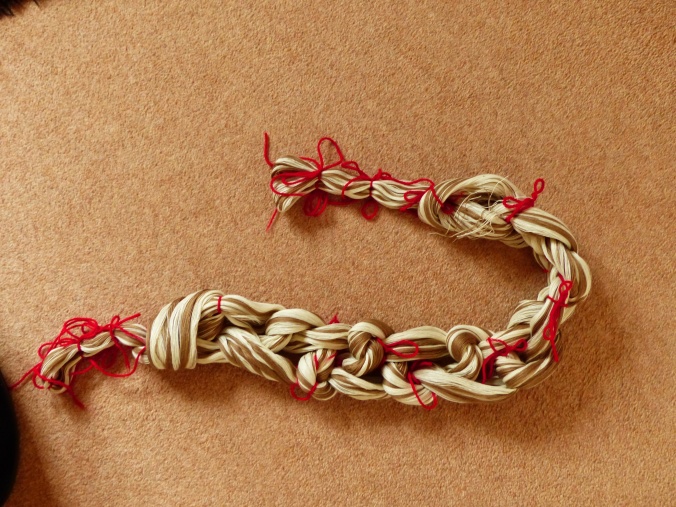 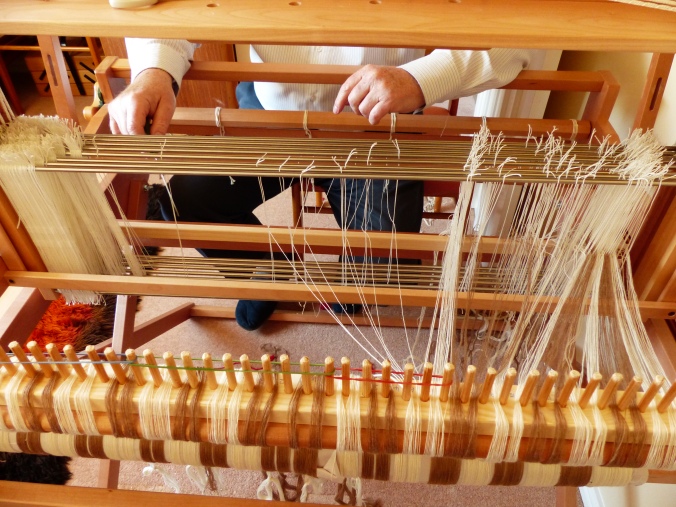 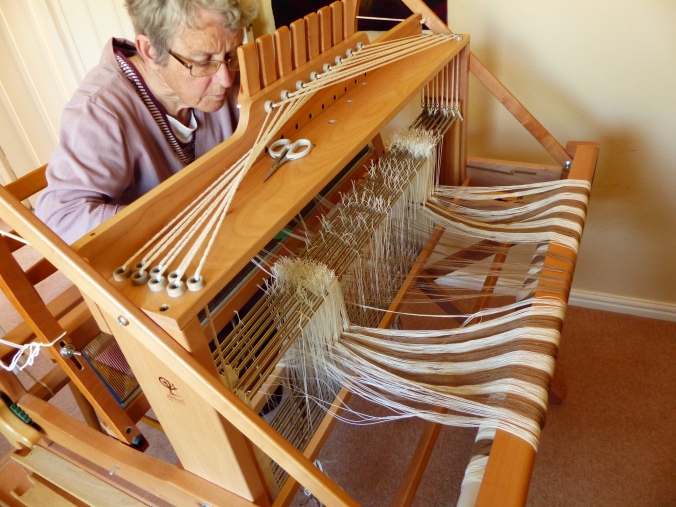 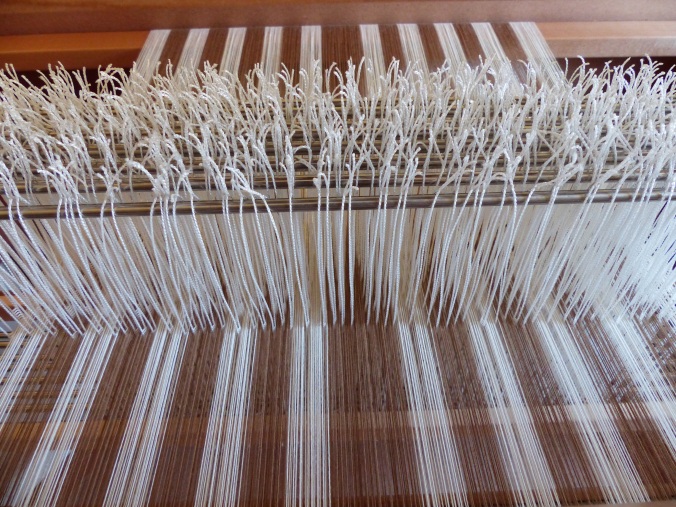 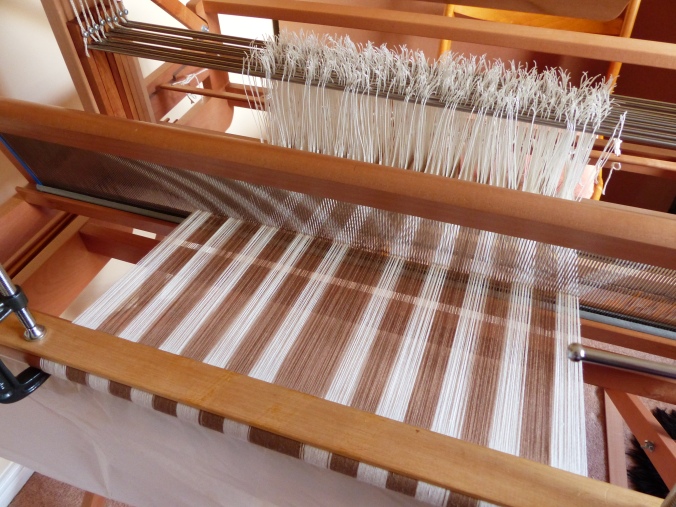 Finally, having worked out our idividual patterns and which levers to lift for every row, weaving can get underway! 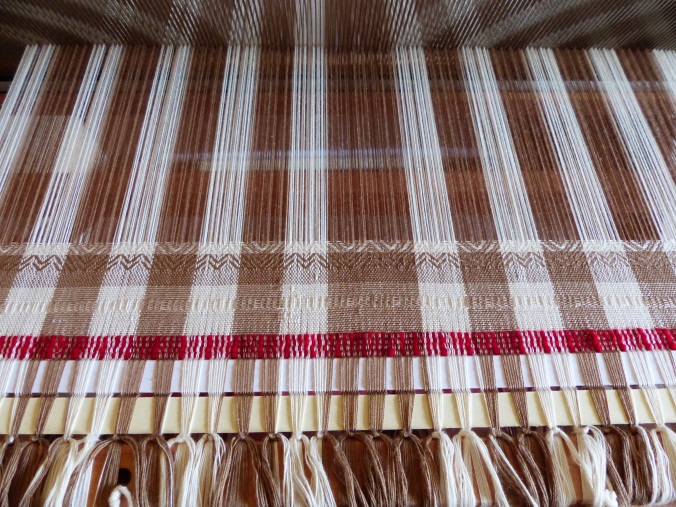 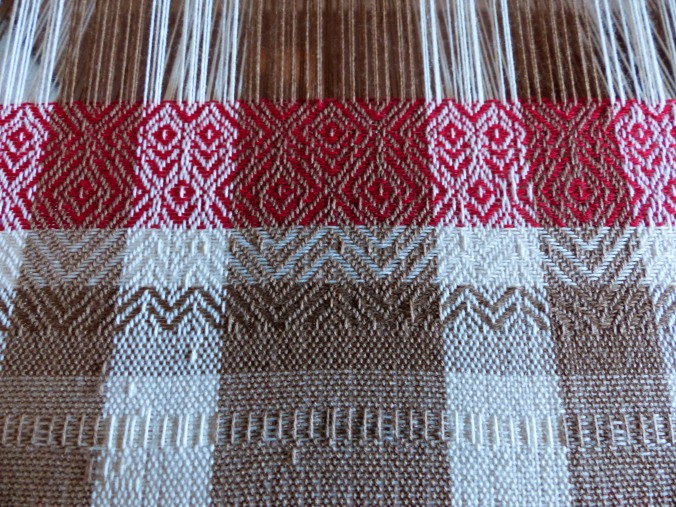