In July 2017, Roger and I celebrated our 50th Wedding Anniversary by staying for a week at Waterwynch House (on the Pembrokeshire Coast near Tenby) with all the family and 17 friends. 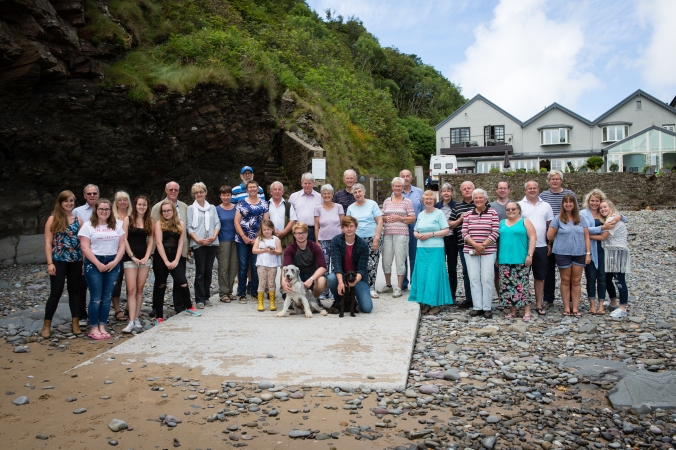 The house had its own beach with pebbles and stones, rocks and sand, cliffs and caves, and a 10 acre garden with a stream and woods on the cliff. The Pembrokeshire Coast Path passed behind the house.

Amelia and I spent a lot of time on the beach looking for little creatures, seaweeds, rocks and other things. Here are some extracts from the book we made.

When we arrived in the late afternoon of 21st July, the sea was high in the Bay, as in the top pictures. This is called High Tide. The level of the sea goes up and down because of the gravitational pull of the moon and  sun on our planet. The next day, we were able to play rounders on the sand when the tide was low.

There are two high tides and two low tides every day (actually, in every 25 hours) because the earth is rotating. The height of the high tides and low tides varies a lot. The biggest difference between the high and low tides is when there is a “full moon” and a “new moon”. The high tide varied between being 6 metres and 8 metres higher than the low tide during our week. This means that if our houses were built on the beach at the low tide mark, they would be completely covered by the sea at high tide! Or if you put eight Amelias standing on top of each other’s shoulders, the top one might just have her eyes above the sea at high tide – the rest would be under the sea, just like the rocks and sand! So we could only play on the sand for about 7 hours each day, and the caves we explored when the sea was ‘out’ were filled by the sea at high tide.

There were several caves we could go into when the tide was out. They went a long way into the huge cliffs. The colours of the rocks inside were beautiful – yellows, oranges and reds. It would have made a lovely little home if the sea didn’t fill it up to the roof when the tide comes in every day! 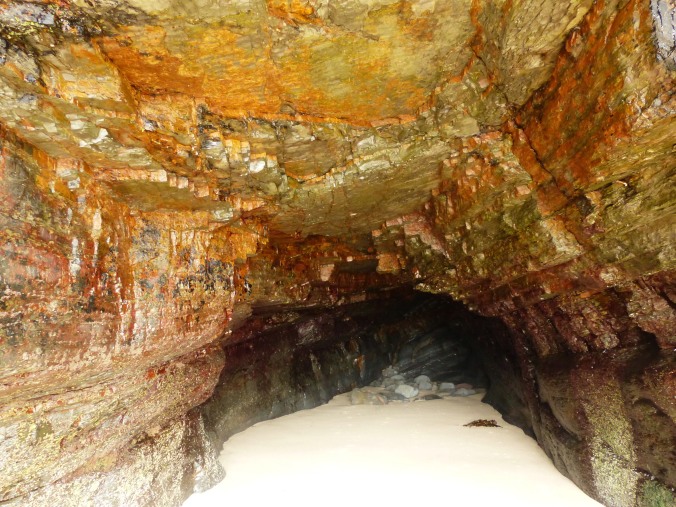 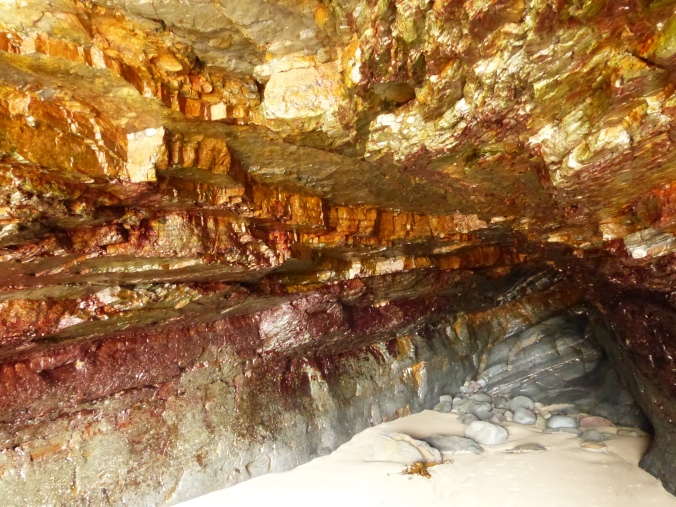 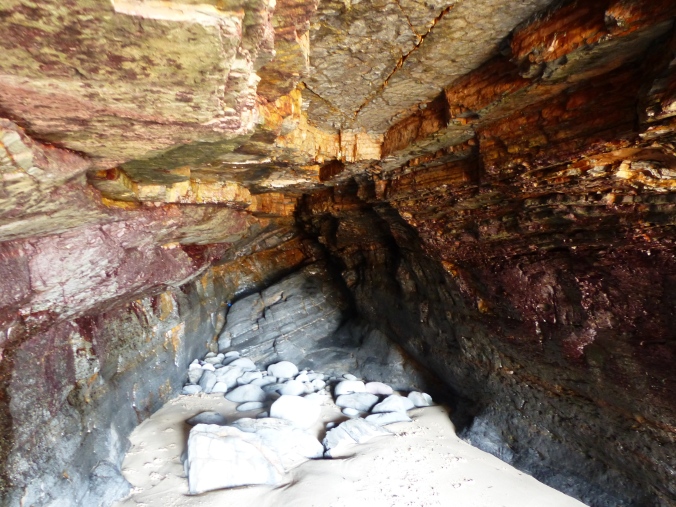 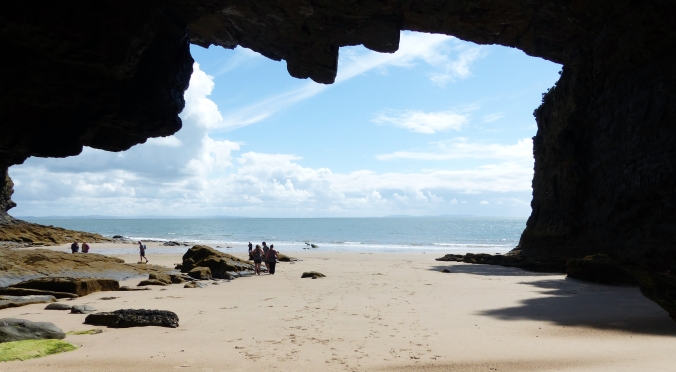 The rocks are ancient – more than 300 million years old. They are sedimentary, formed from tiny pre-historic plants and animals being squashed together in layers. Different minerals, like iron, give the rocks lovely colours. 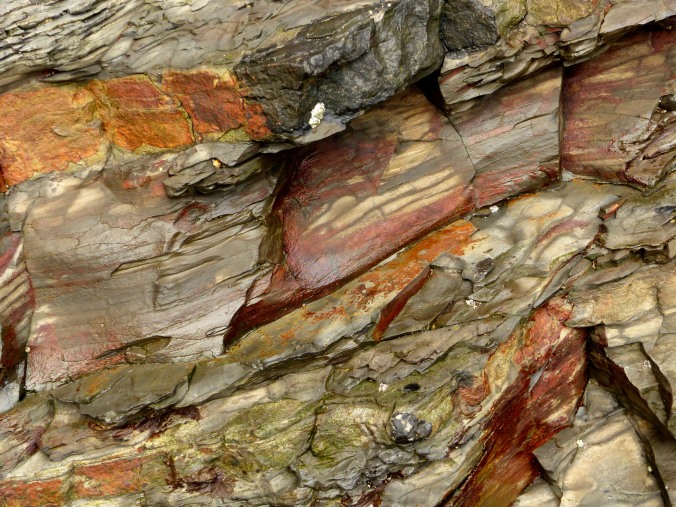 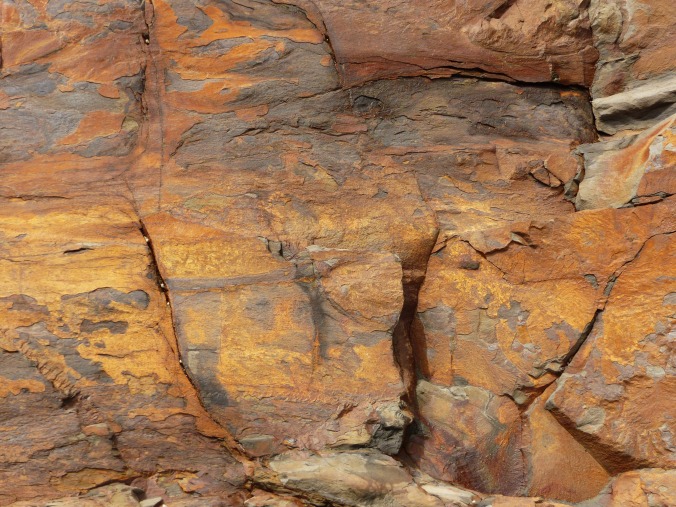 Violent movements in the earth’s surface caused the rocks to bend, melt and twist, crack and tilt, like playing with layers of coloured plasticine and pushing them into different shapes. Can you trace the layers, curves and cracks with your finger?

The crashing, pounding sea and enormous ice glaciers during the Ice Age have also changed the rocks over millions of years, grinding them down to make sand and eroding holes and caves where some of the rocks were not so hard. Some of the rocks on the beach were ‘softer’ sandstone which we were able to draw with on other stones. 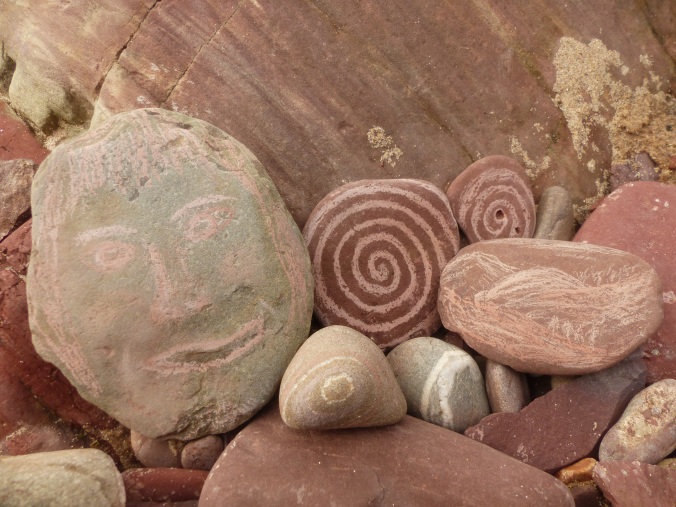 Sea water is much too salty for humans and land animals to drink. We couldn’t live under the sea either because we need to breathe oxygen from the air. However, there are thousands of very special animals which can live in the sea. When the tide went out, we found some of these creatures – some were like land snails, but most were very different and strange.

Every day, we found large JELLYFISH stranded and dying on the sand. They catch their food with their tentacles and large “oral arms”. Becky was stung badly by jellyfish when she was swimming in the sea. 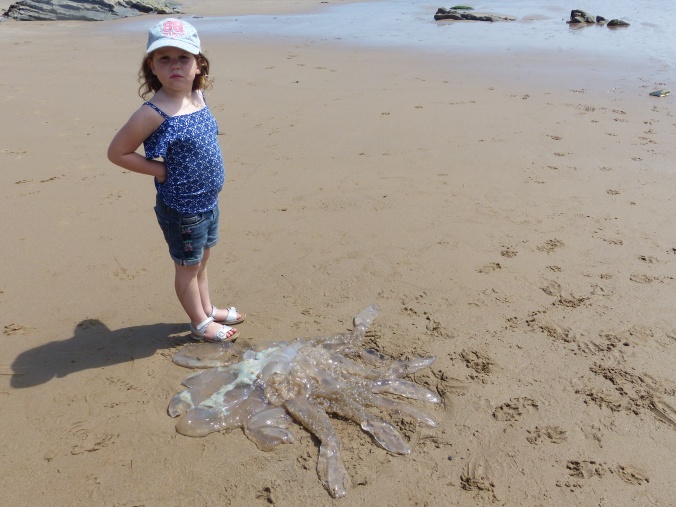 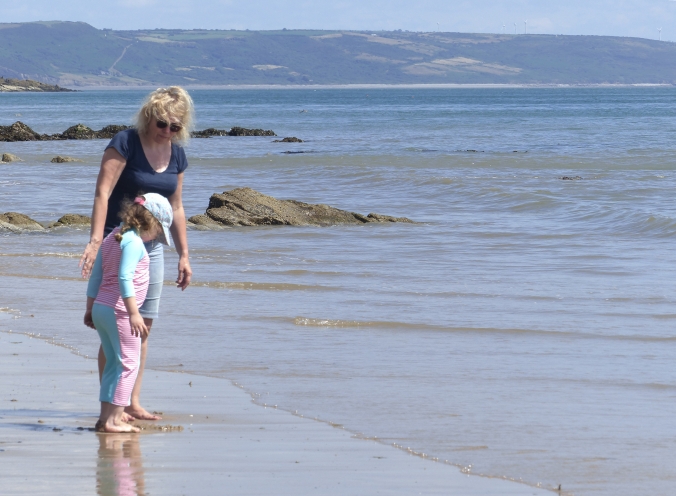 Large smooth, grey rocks, which were under the sea when the tide came in but exposed at low tide, were made rough and razor-sharp by millions of yellow-coloured barnacles living on them. Tessa and Libby got nasty cuts on their legs from slipping on the barnacle-covered rocks.

BARNACLES are small CRUSTACEAN animals with a very hard exoskeleton OUTSIDE their bodies to protect them. We have our skeleton (bones) INSIDE our bodies. Barnacles catch PLANKTON (trillions of tiny creatures floating in the sea which are too small for us to see) with feathery ‘tentacles’. They are hermaphrodites (each animal is both male AND female!) and live for 5 to 10 years.

We saw HERRING GULLS eating barnacles and a large crab. Crabs are also Crustaceans. The Herring Gull has such a strong bill that it can break open the hard exoskeletons and eat the soft flesh of the animals inside. 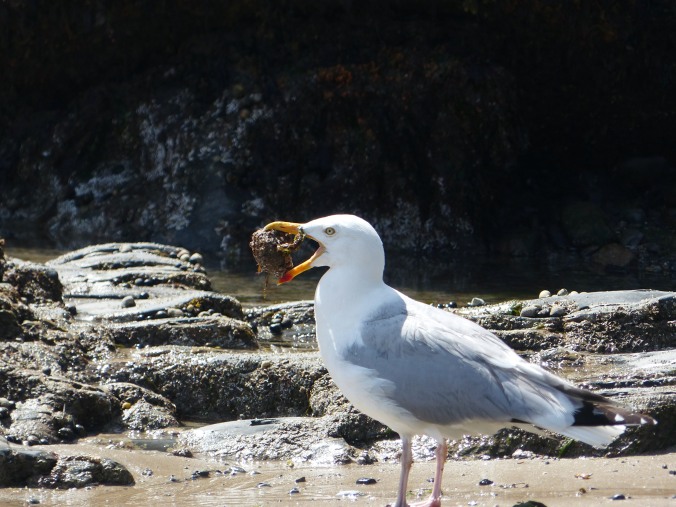 When the tide went out, there were little pools left in the rocks and sand where we found lots more fascinating MARINE (sea) plants and animals. 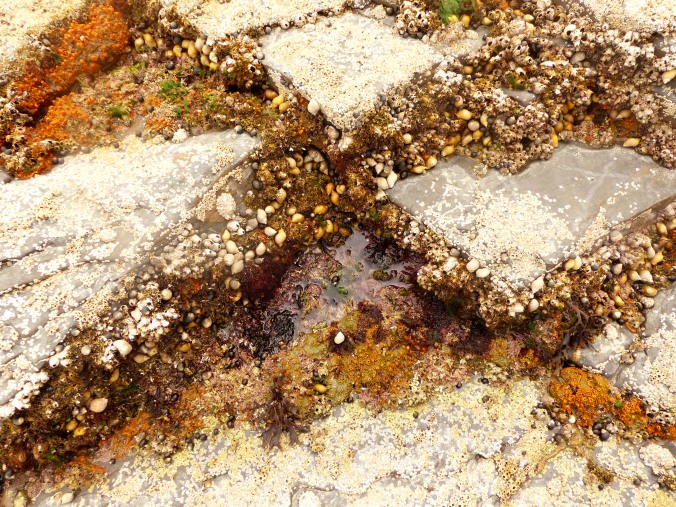 BEADLET ANEMONES are soft animals (not plants or flowers) with 192 tentacles which they use to catch other marine animals to eat. They can slide along the rocks under the water. The blue beads around the edge, between their tentcales, have stinging cells to fight viciously with other anemones which invade their privacy – unless they are related to each other! But they don’t hurt people.

If Beadlet Anemones are left out of the water when the tide goes out, they pull in their tentacles and shut themselves up into a soft jelly-like shiny ball. Up to 100 babies develop inside the body cavity. When they are ready to be born, the parent pushes them out into the sea where they land on rocks and attach themselves. 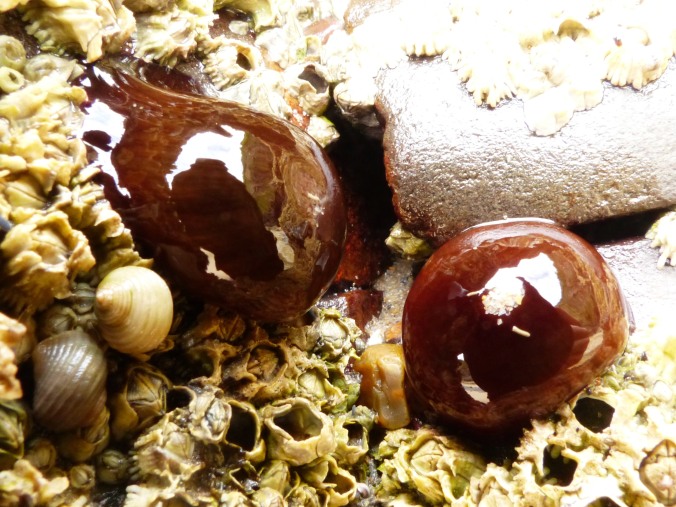 SEAWEEDS are strange and fascinating. They are not true plants – they are ALGAE. But they still make their food using the sun’s energy and chlorophyll, which is what gives plants their green colour. There are 650 species (kinds) of seaweeds in the UK which belong to three groups – Red Algae (the most common), Green Algae and Brown Algae. Some look like coral because their fronds are calcified and stiff, and some form a hard covering layer on rocks and shells. They make magical marine gardens.

Many sea animals are called SHELLFISH even though they are NOT fish – they are MOLLUSCS with shells instead of skeletons, like these LIMPETS. They extract oxygen dissolved in the sea water through gills. Limpets move around slowly to graze on seaweed (algae) using an organ called a radula which has ‘teeth’ made of the strongest known natural substance! When the tide goes out or there are violent waves, they ‘stick’ themselves to the same place on their rock using a suction ‘pad’ and mucus. Limpets can live up to 20 years. They all start life as males, but some then change into females when they are 2-3 years old! Different Molluscs have been in the world for millions of years and can often be found as fossils. We can eat many kinds of Molluscs – perhaps that’s why they are called Shellfish. 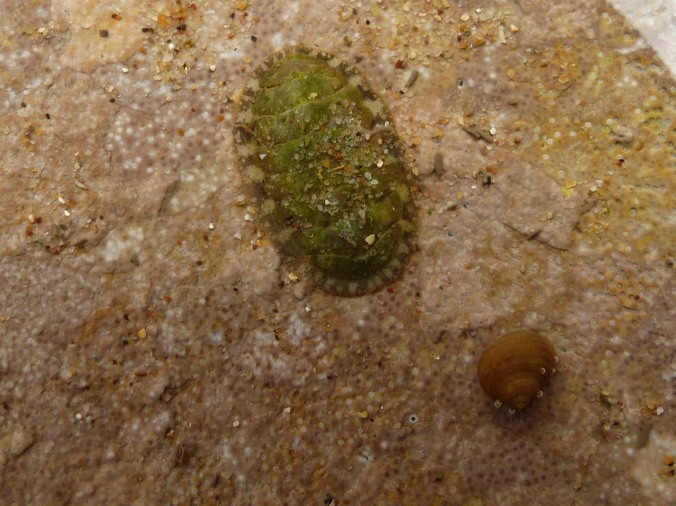 PERIWINKLES are edible WHELKS. They have deeply etched whorls on their shells.

When the tide was out, we found hundreds of DOG WHELKS clustered together on the rocks. They eat other Molluscs by drilling a hole in their shells, liquidising their flesh with an enzyme before sucking it out! You would never guess that when you see them lying still on the rocks, would you? They can live for up to 20 years.

Dog Whelks lay many eggs (only a few of which are fertile) in capsules. When the first babies hatch, they eat the infertile eggs and eventually emerge from the capsules as tiny whelks.

We had lots of fun drawing very large patterns and pictures in the sand with rakes. 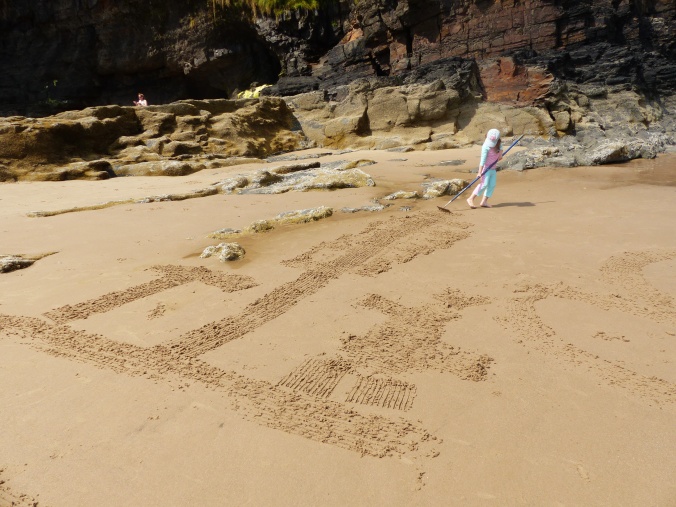 We also drew a huge labyrinth (maze) on the sand for anyone to walk round. We invited people to pick up a stone at the entrance and take it with them to put at the centre of the labyrinth. There were 30 stones at the centre by the time the tide came back in and washed the labyrinth away. 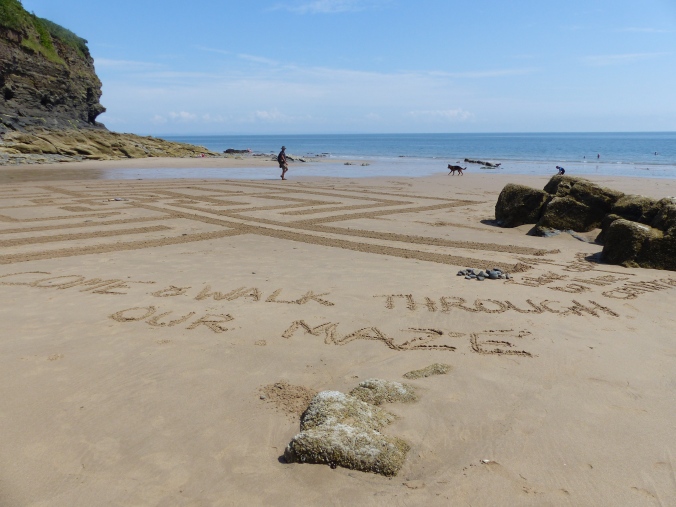 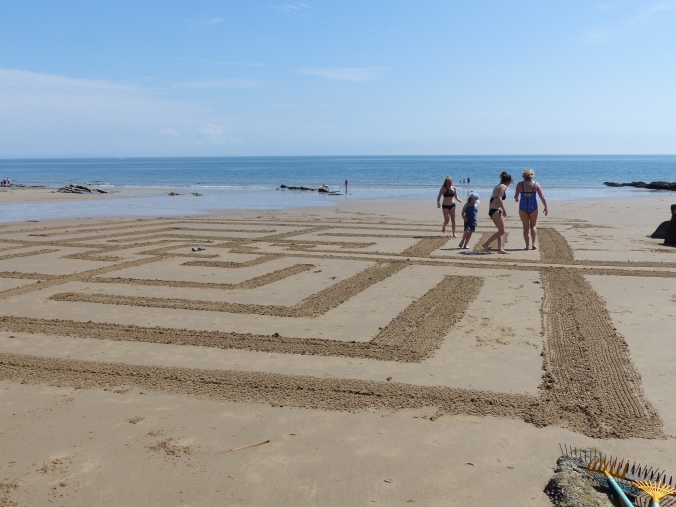 Marine (seashore) SPRINGTAILS are INSECTS – one of the very few insect species which live on the seashore. They are very small (2-4mm) with 6 legs and antennae, and are covered with dense velvet-like blue hairs which trap air for them to breathe when the sea covers them because they don’t have gills. They float in groups on the water surface of little pools at low tide and hide in rock crevices when the tide comes in and covers them. They scavenge (feed off) other little dead marine animals.

We found several different MARINE WORMS. This GREEN LEAF WORM (upper left) was amongst seaweed on a rock.

SAND MASON WORMS (right) live in the sand and can be up to 30cm long. They make protective tubes above the sand out of tiny bits of broken shells and sand ‘glued’ together with mucus. They catch their food with the tentacles on their heads. 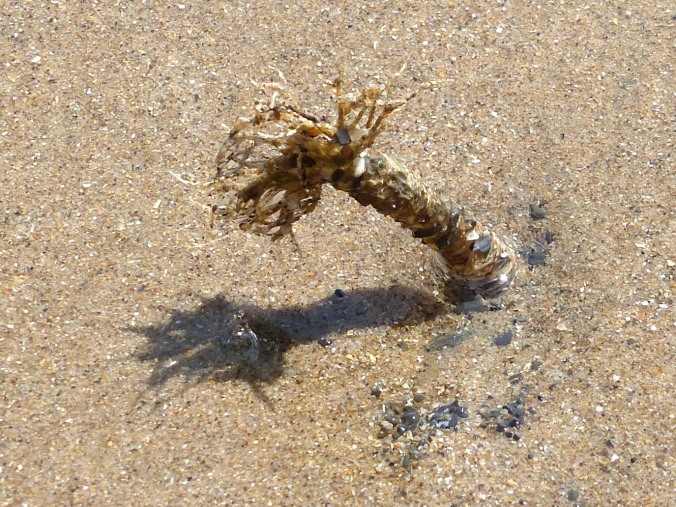 SPONGES don’t look like animals, but they are actually the oldest and simplest kind of animal on the planet, having been around for millions of years. They filter hundreds of litres of sea water every day, extracting plankton and bacteria to feed on. We found orange, pink and yellow sponges. 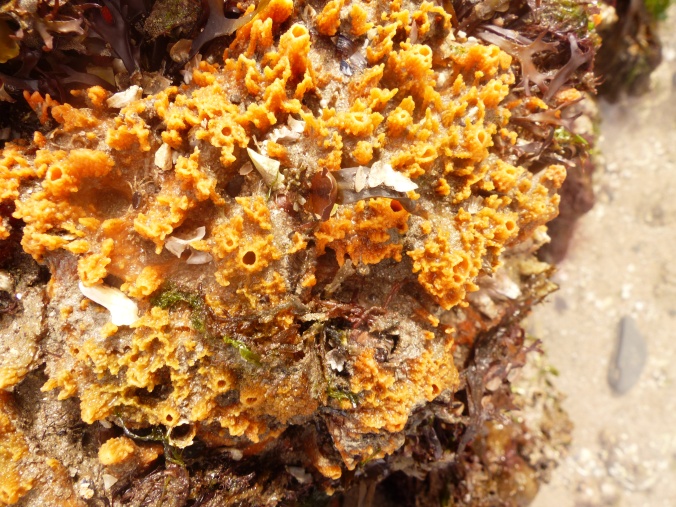 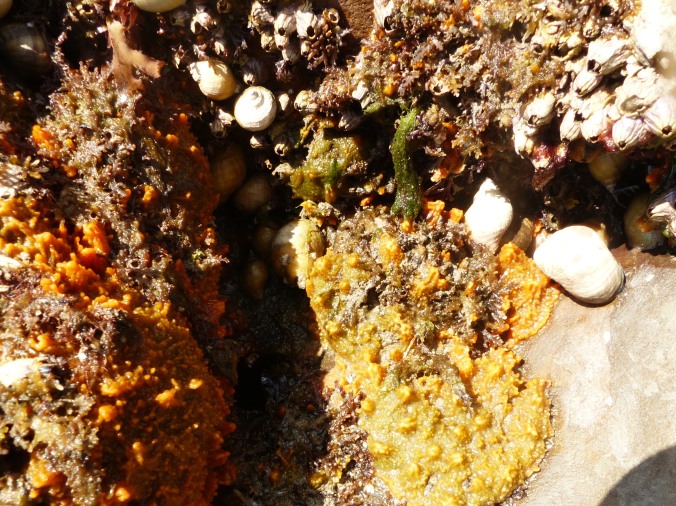 We saw lots of tiny grey CRABS, but they moved too fast to photograph! But we did get photos of HERMIT CRABS which live in the empty shells of dead aninmals to protect their soft bodies. We also found small, shrimp-like creatures which were very hard to see in the sandy pools because their bodies are transparent. These are all CRUSTACEANS. 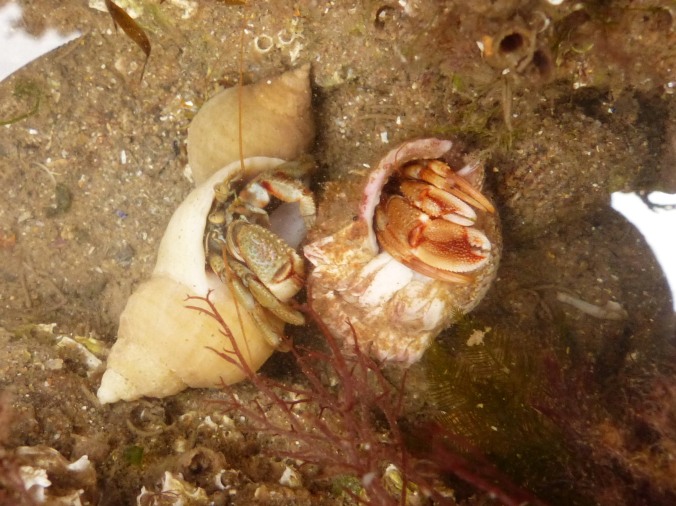 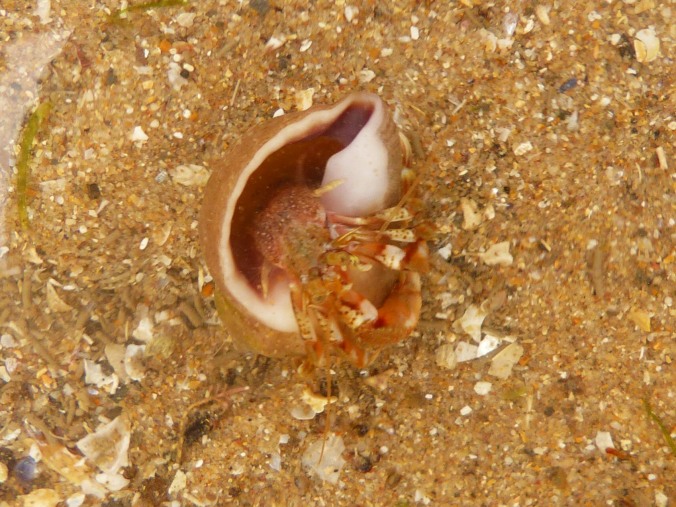 We loved all the amazing colours, shapes and textures of the seaweeds, sponges, shells and rocks. 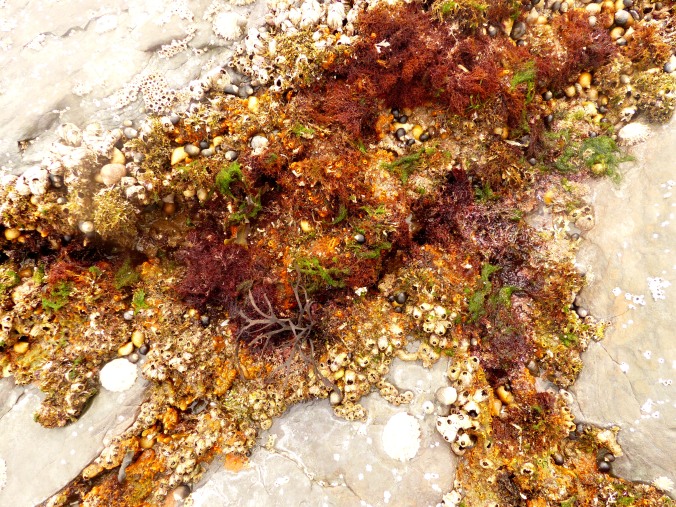 We also saw a few birds and animals on the cliffs and in the garden and house. 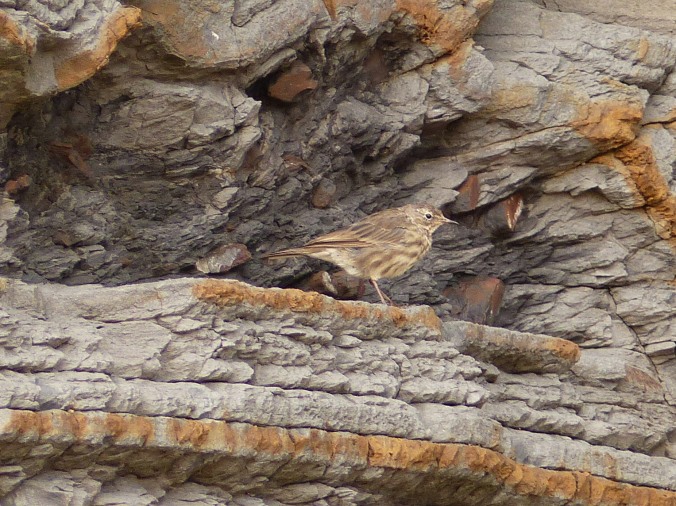 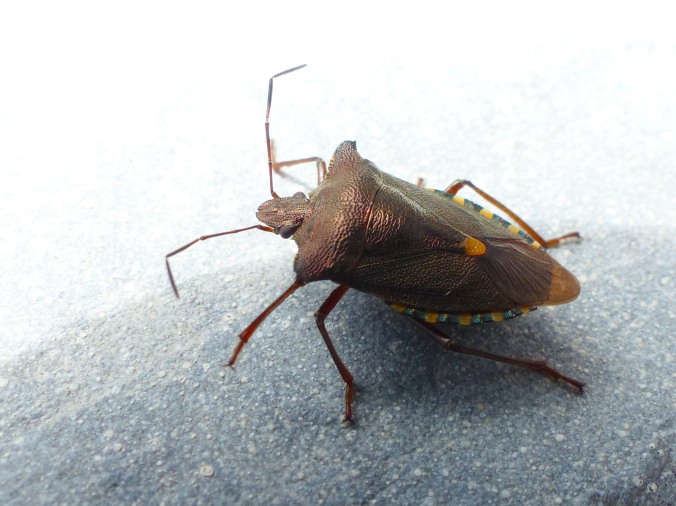 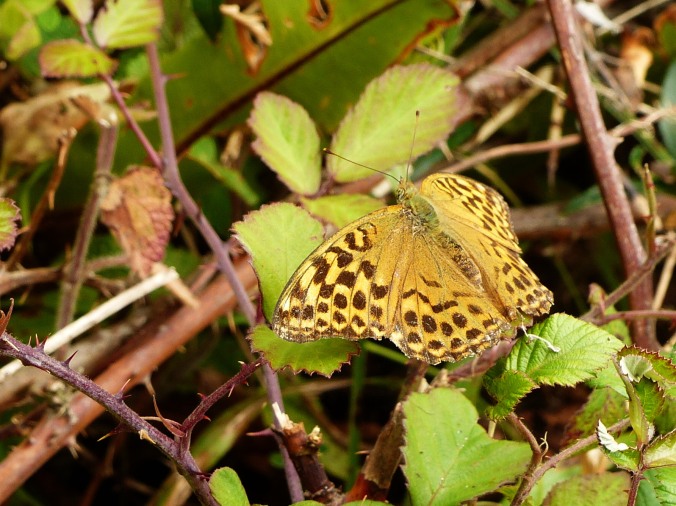 We saw two amazing rainbows over the sea – at the beginning of the week and on our last evening – a wonderful way to end a fantastic holiday. It is very difficult to explain how a rainbow is ‘formed’ as it is quite a complicated physical phenomenon. You can only see a rainbow if the sun is shining from behind you and there is rain somewhere in front of you far away. A rainbow is formed when the sun shines on trillions of tiny raindrops, each one of which acts like a tiny prism splitting the white sunlight into its different component parts and reflecting it back to us. We can usually see and recognise seven different colours, which are always in the same order, in a rainbow. 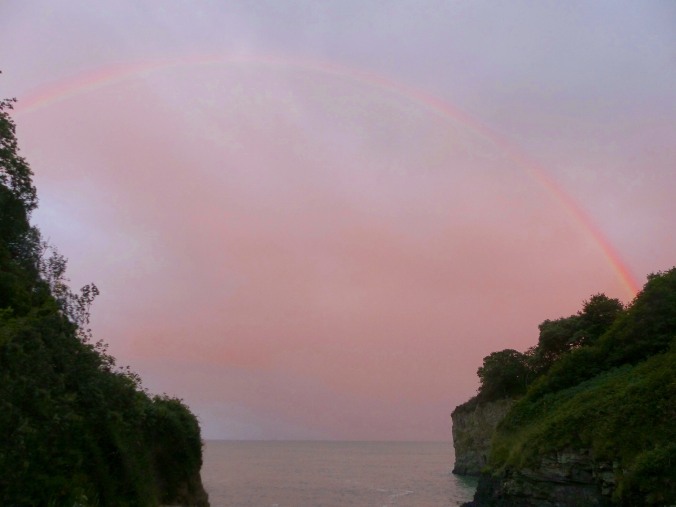 Amelia and I are already taking more photos ready for our next Nature Book.

I can only show some of my photos on this website, so if you want to look at more, please go to Flickr.

My videos are on Vimeo.