Arakit Margaret Ruth Stevens (as she is quick to tell anyone who asks her what her name is) had insisted that a chicken be killed for me to eat before I left – so chicken it was for my last meal there!

We left Tubur for the half hour journey to Ococia at 3.30pm. Emma (Emmanuel Eyomu, an artist and brother of Adongo Jane, one of TESS’s old sponsored girls) was worried about us leaving ‘so’ late in case it rained, which makes parts of the road impassable. But there was no sign of rain.

We found Emma sitting on the veranda with another teacher, surrounded by the thirteen children in the special needs school who gave us such a warm welcome, with hugs and smiles. We immediately felt relaxed and at home in such a happy environment.

The small buildings are freshly painted in white and blue and covered with Emma’s wonderful murals. The toilets are certainly the most beautiful toilets I have seen anywhere in the world! On the walls of a neighbouring building, he has painted a half open door and a woman standing at an open window waving to passers-by – everyone is at first fooled into thinking are real and some wave back! 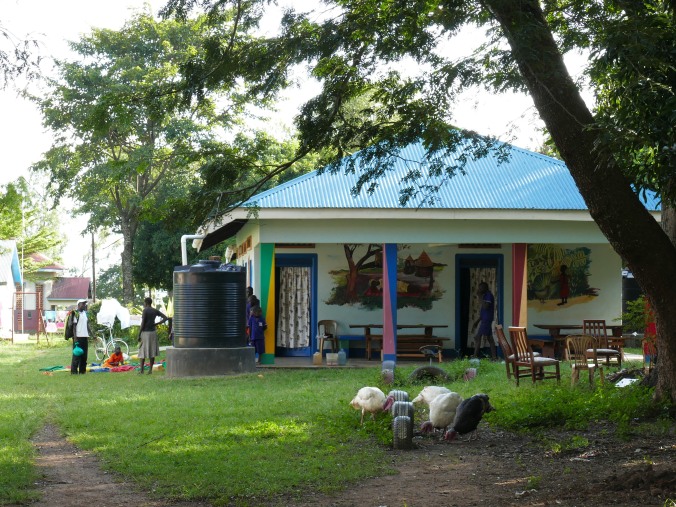 Emma showed us around, not only the school, but also the nearby hospital which is actually only a Health Centre III, so doesn’t have a doctor or theatre. However, the nun, Sister Veronica, who runs the hospital is a very experienced, highly trained nurse and a remarkable woman. We have never seen a hospital like it in Uganda, well laid out with strong iron beds made locally. Even at the end of the day, it was so clean. As we walked towards the administration block, we saw Sister Veronica herself sweeping the building. Emma introduced me to her and left us to talk together for some time. Apart from periods away training, she has spent most of her working life in this hospital and has as much experience as most doctors. The stories of the LRA invasion in 2003 and the risks she took to keep the hospital running, despite the attempts of the LRA to abduct her, were horrific and tragic. She was treating and stitching terrible wounds and gunshot injuries, especially head wounds including those where ears, noses and lips had been cut off, and yet they had virtually no equipment or drugs or food left. (The infamous Lord’s Resistance Army waged an horrific war mostly in the north against the government and people for so many years, killing thousands across northern Uganda and abducting thousands more, mostly children, to fight and to be sex slaves and porters. A few of our sponsored students were abductees who had escaped after several years and are still deeply scarred and unable to live a normal life.) We also talked about sickle cell children and their care and treatment – they have many here and so make sure they always have blood available for them. Robert and I agreed that next time his sister’s baby has a sickle crisis, they should bring him here, which is just as close as Soroti Hospital. They are hoping to build a theatre and extra wards next year so that they can be upgraded to a Health Centre IV and get a permanent doctor.

A small team of ophthalmologists arrived about the same time as us to do cataract operations over the next week. There are also two Dutch women audiologists here for two weeks. I stayed with Trus and the volunteers, which has been interesting, while Robert shared Emma’s room and ate locally. 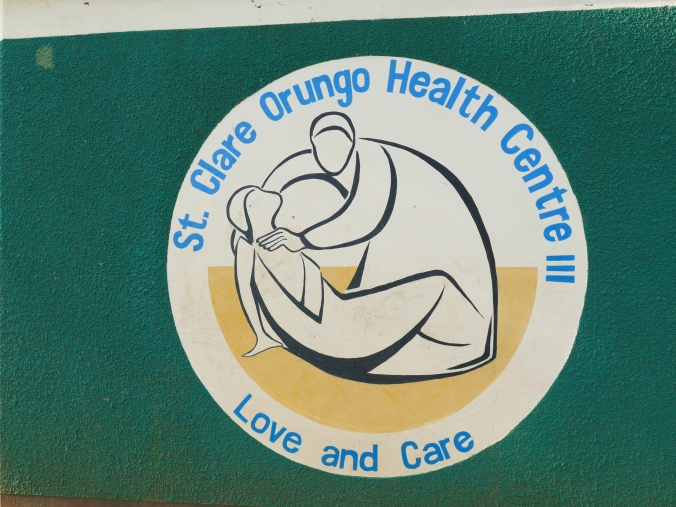 Kitchen for relatives to cook meals for patients

The dog was brought by a patient! 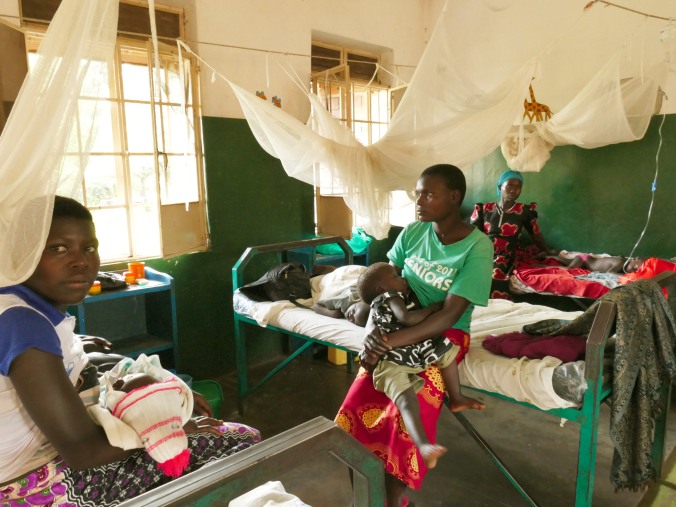 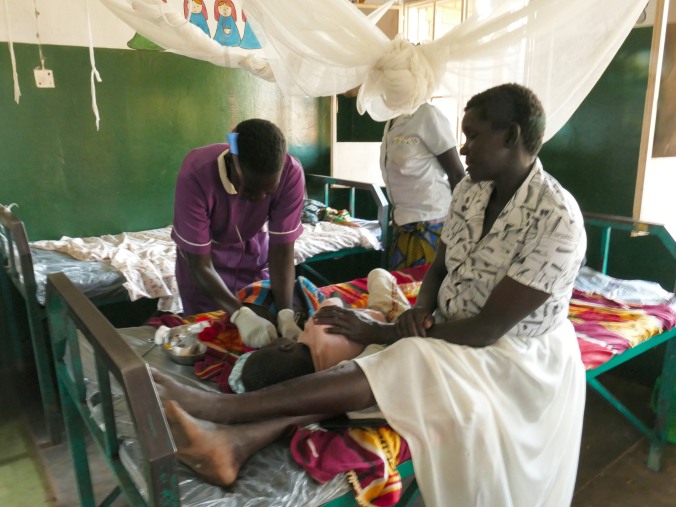 After dinner on Wednesday, we joined the weekly campfire led by Emma who was brilliant. It included storytelling, singing and dancing, at which everyone – visitors, staff and children alike – were expected to take their turns, with much encouragement and praise. It was a very special experience with so much laughter.

The Dutch woman, Trus (probably in her early 70s), has been living here for ten years working in the hospital. She became aware that she never saw children with learning disabilities which puzzled her, so she started investigating and found there were many, but they are kept shut away in their grass-thatched houses as they are considered mad, a curse and something to be ashamed of. I have sometimes wondered if Down’s Syndrome is something which only affects white races (just as sickle cell anaemia only affects Africans and Balkan people) as I have never seen anyone in Uganda with Down’s – until now. Seven of the thirteen children have Down’s, with all the same features and symptoms, but they are kept hidden away. The others have brain damage which may well have been sustained during difficult births. The families need educating perhaps even more than the children, who make enormous strides once they come here where they are so loved and nurtured and valued. “I have five children – and one mad one.” Now they are beginning to say, “I have six children”. The school takes them from about seven to fifteen, after which there is nothing for them. Many come unable to do anything, including talk or use the toilet. Now they can play games, ride bicycles, speak Ateso and even some English, look after themselves, learn skills and crafts, help with the chores, get on with each other – and, most importantly, they are so happy. 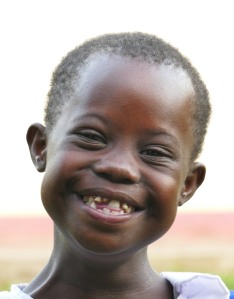 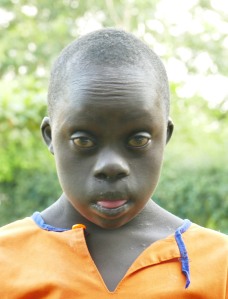 Emma now teaches here every day although the children go home on Fridays for the weekend, so he goes back to Soroti then. He has a wonderful gift with the children, so gentle and sensitive, fun and creative in all his interactions with them at every level. None of the teachers has had any training for working with special needs children. It is clear all the children are making progress, even the two or three with challenging behaviour. Trus will not allow any beating (common in every school) – she will sack the teachers immediately if they do. So they have found alternative ways and the children are very well behaved, something which Ugandans think is impossible without beating!

Robert has also been very impressed and happily spent the whole of Thursday with us all. I showed the staff how to do peg loom weaving in the morning, using long strips of fabric – Robert was able to take it over and teach others – between them, they completed a small rug which they were very impressed with. Now that they know how to do it, they can get more “looms” made to teach some of the children. In the meantime, I showed the children how to use scissors to cut fabric and, later, finger “knitting” to make bracelets. I was surprised how many of them caught on, even though it took most of them a long time; they were thrilled with their bracelets. One boy has a deformed arm and hand, which made it very difficult; but he was determined to do it, so with my help and using a pen instead of his finger, he made a bracelet. It was so rewarding to see how delighted he was. I showed them how to make origami flowers in paper and fabric, and decorate paper flowers which, when folded and laid on the surface of a bowl of water, open up to reveal the colouring inside (something I was shown recently).

Learning to use scissors 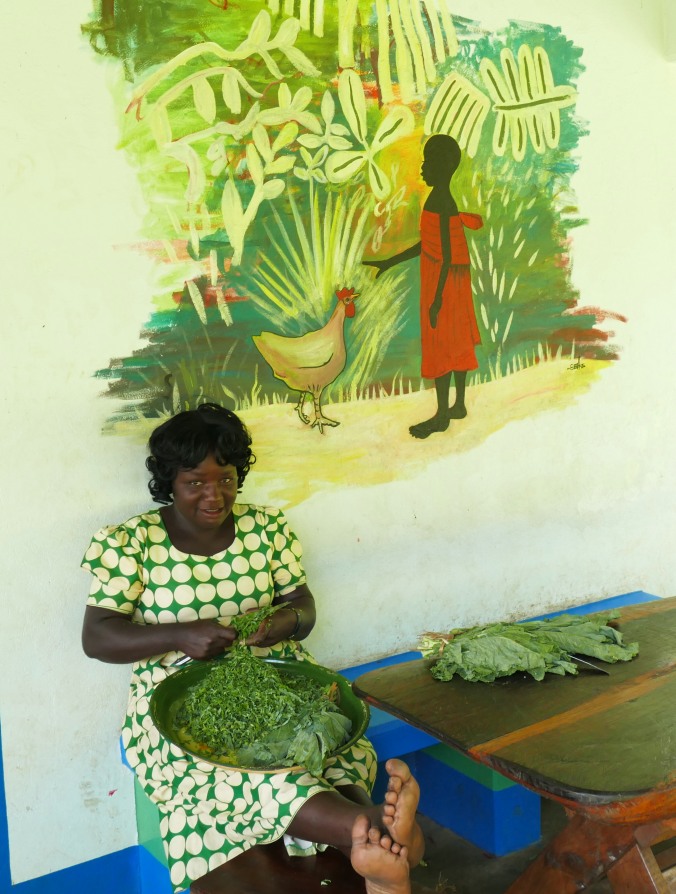 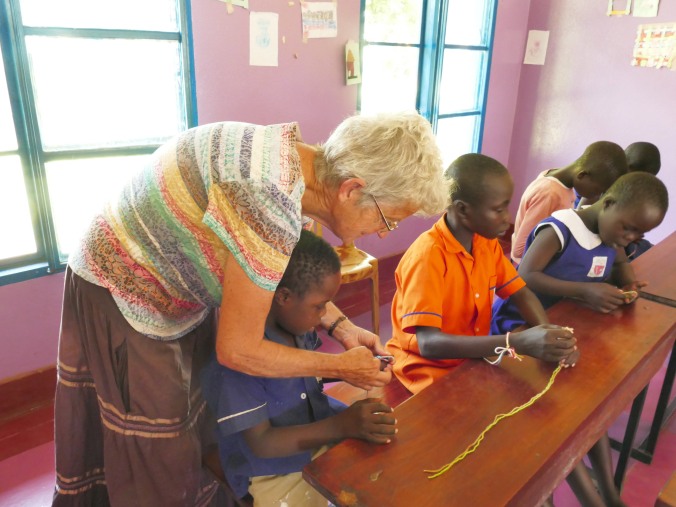 They had various other activities, with frequent short breaks, such as playing with a coloured parachute and other games. In the afternoon, all but two of them, who were frightened, had so much fun throwing themselves around in a 3m x 4m x 0.7m deep pool. There is also a trampoline and three small bicycles which many have learned to ride. 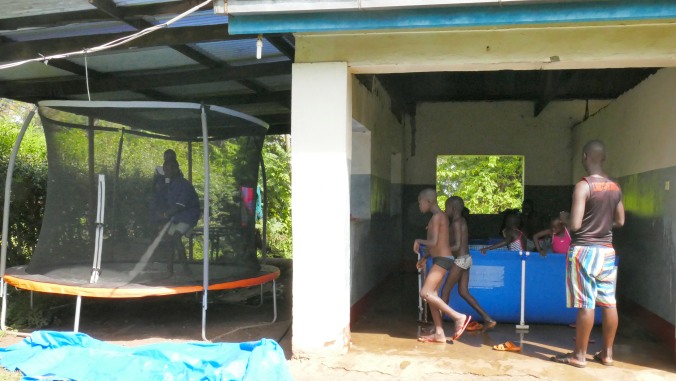 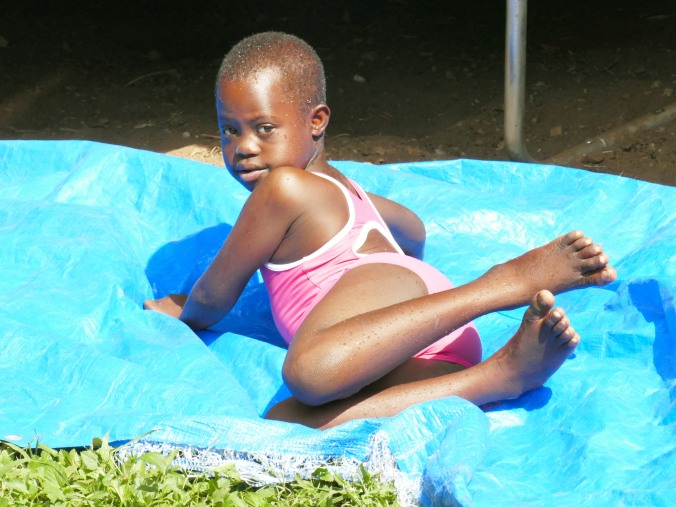 After clearing up, Moses took me into the lovely octagonal church in which Emma has painted amazing murals of events from the Gospels. Moses is the last born in Emma’s family and is having a year out of school because Emma can’t afford to pay his ‘A’ level fees at the moment. So he is helping around the compound and sleeps with the boys, one of whom has epilepsy, at night. Emma took Robert off to watch volleyball and play pool – Robert is very good at the latter, so he was looking forward to beating the locals as well as Emma! 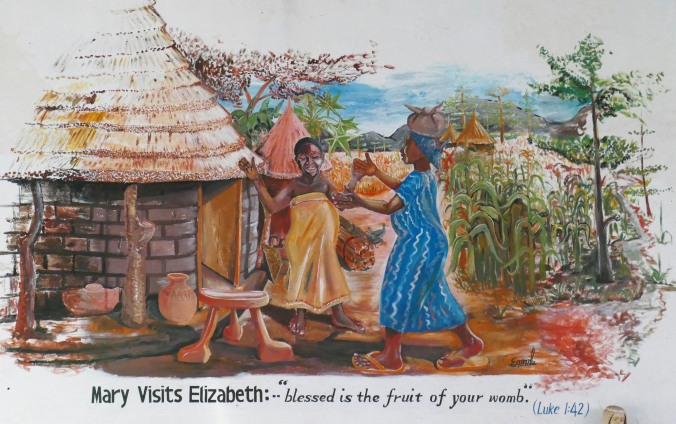 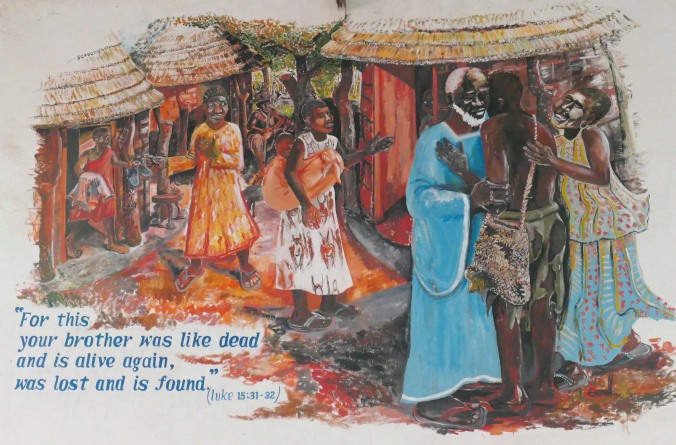