As usual, I have got very behind in writing up my dairy!

Monday – Wednesday, 28th – 30th October
There was ice covering the car when we set off for Birmingham airport at 3.30am on Monday 28th – and brilliant lightning followed by warm torrential rain which flooded the roads at 11.30pm as Robert drove me from Entebbe airport to Ben’s home in Kireka, on the far side of Kampala. Between those two extremes, I flew over a patchwork of sunlit fields; expanses of fluffy white clouds; steep rocky mountains of the Alps and Baltic countries, some with snowy peaks; the deep blue Mediterranean sea; fascinating patterns and colours in the seemingly endless deserts of north Africa broken only by the Nile and the lake formed by the Aswan dam, which seemed to make little impact on the surrounding desert. It was dark by the time we flew over South Sudan, Uganda and Rwanda, but I followed the route on the screen in front of me, thinking of village life, refugee camps and wildlife below me, all fighting for life. After an hour in Kigali, when the plane was cleaned and new passengers taken on board, it was just a short flight northward, over Lake Victoria and back to Uganda.

Robert, helped by his younger brother Denis and nephew Simon, looked after me so well, all taking it in turns to cook and take me out to change money and buy a internet modem. In the meantime, Sam Opol was sorting out his car, which he is lending me, ready to come and collect me on Wednesday morning to take me to his home in Serere, in Teso.

Stephen Eitu (who knew Roger when he was running TDT and visiting Teso regularly many years ago) had come with Sam to share the driving as it is a long journey. We stopped for lunch in Iganga in the cool gardens of a lovely back-street restaurant, which we found by accident, set up and run by Musana, a community project. They decided to take a short cut on murram roads, which were mostly quite good, off the Tirinyi road to Pallisa and then northwards to Ngora. Halfway along, we discovered the road was blocked, so had to find an alternative, unknown route, which meant frequent stops to ask the way – not always easy because of different languages. It was fortunate that the roads were reasonably dry – until, that is, we passed Ngora when it started raining heavily again, turning the road into something of a quagmire.

Apart from a short nap, we talked almost non-stop for ten hours! We eventually reached Serere long after dark, at 8.45pm, where Margaret had a very welcome meal waiting for us. Their young twins were trying to keep awake as they had stayed up to see us. They decided not to eat the apples from our garden, which I had given them, but to take them to school the next morning! Robert travelled on the night bus back to Soroti to join me in Serere on Saturday to accompany me for the rest of my trip.

Thursday 31st Oct
Again, we talked a lot! Sam enjoyed showing me around and telling me about his dreams for becoming self-sufficient at home here in Serere where he and Margaret have already built a primary school which currently takes 200 children. He has already made a start, with rabbits, goats and bees, which he will expand, as well as adding fish, chickens, pigs and vegetables, all of which will be inter-dependent by re-cycling waste and surplus materials. We sat in the shade of a tree on the top of the hill his father passed on to him which has wonderful views over the surrounding countryside. It is all very green at the moment because of so much rain.

Lots of rain might sound a blessing, but the fact is that it is far too much at the wrong time – root crops are rotting in the ground and many roads are impassable, especially in northern Teso. So famine is anticipated, especially if the approaching dry season is also too long and severe, as it has been in recent years.

At 3.30, Stephen took me beyond Serere town to visit Kenneth Adiamet and his family in Obulaya. I haven’t seen Kenneth, or even been in touch, since he attended a Workshop I ran in 1997, but he left an impression on me because of the beautiful songs he was writing. Thanks to my old diaries and social media, I ‘found’ him recently – and discovered that he is the maternal uncle of one of TESS’s old sponsored students, Amutos Irene!

The final part of the drive was along a footpath into their compound which had been cleared and swept. Everything was laid out beautifully, and the compound was full of young children as well as adults. We hadn’t known much about each other, so some of the time was filling in the many gaps! Kenneth dropped out of school before taking his final Primary Leaving Exams (PLE) because his older brother, who was killed in the insurgency in the late 1980s, left a wife whom the clan elders asked Kenneth to “inherit”, which he was willing to do. He said they have been happy and love each other very much. They have seven children and sixteen grandchildren, with two more on the way! He has been working in the PAG (Pentecostal) church for many years, which is why he came on the workshop in 1997. About 15 years ago, at the age of 40, he decided to go back to school and was allowed to join secondary school as long as he also returned to Primary 7 to take the Primary Leaving Exams. He went to the same primary school as his own children were attending and lined up with all the children for roll calls! He passed his PLE and went on into the second year of secondary school, taking his ‘O’ levels (GCSEs) three years later. Kenneth has been a missionary in Karamoja, planting churches, and is now doing the same in Iganga. We had a lovely meal after it got dark, before returning to the Opols.

Kenneth & some of his family 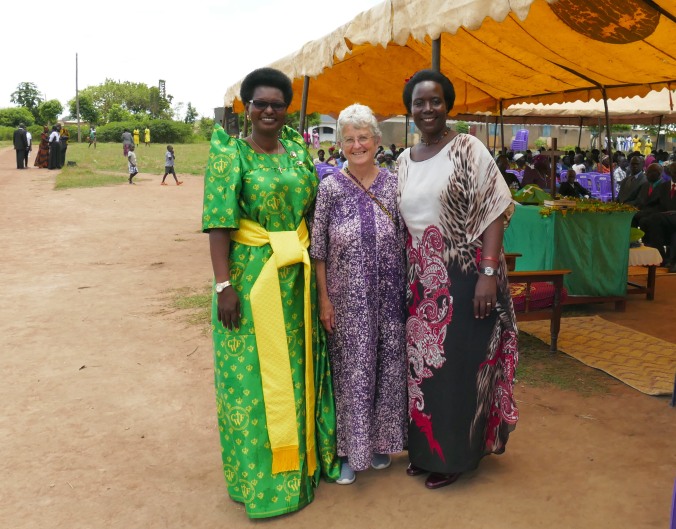 Friday, 1st November
Sam left at 6.00am (before I was awake!) to go to Mbale by public transport to teach at the UCU Campus there, which he does every Friday. He has 8 hours of lectures to give between 9.00am and 8.00pm, before starting the long journey home. I was in bed by the time he got home at 11.30pm!

Before breakfast, Margaret took me to the church on the hill which Sam’s father built about 30 years ago (in which I had spoken in 1995) for the weekly devotions for all the school as I had been asked to speak to the children.

After a late breakfast, we set off for Sapir as the new bishop of Soroti, Hosea Odongo, was coming to celebrate All Saints Day. We arrived when the Bishop and party were being given a tea break which we were invited to join. +Hosea was very welcoming to me and asked me to come and meet him in his office in Soroti on Monday.

Margaret and I were taken across to the tents and canopies which had been set up for the large crowd to give them shade. Helen Adoa was there and pleased to see me. She was Head Girl at Ngora Girls’ School when I took groups there in 1992 and 1994 to help renovate, extend and equip it. One of the 1994 team befriended her and helped her to build Halcyon School. She has gone on to build several schools and is now a very wealthy NRM MP!

As expected, it was a very long service – Hosea told me beforehand that it was going to be longer than three hours! We actually crept away after three hours, during which time about 50 people, mostly children, had been confirmed and two elderly couples were married. +Hosea was in the middle of his lengthy sermon when we left (after one a quarter hours), which was later followed by Holy Communion.

One of the couples at least had actually been married for 60 years – traditionally married, that is, which is a binding ceremony recognised by the state in which both clans are involved and cannot be broken. However, the Church of Uganda excludes such couples from full membership of the church and even from taking Communion. Due to a flawed understanding of the theology of marriage and the history of weddings in church, such couples are considered to be “living in sin”!! But very few couples can afford both a traditional ceremony, which always has to happen first, and the expense of a church wedding sometime later, when they feel they have to have a white dress and all the trappings of a European wedding. Sadly, both these elderly couples had ‘wasted’ money on white dresses, suits etc. 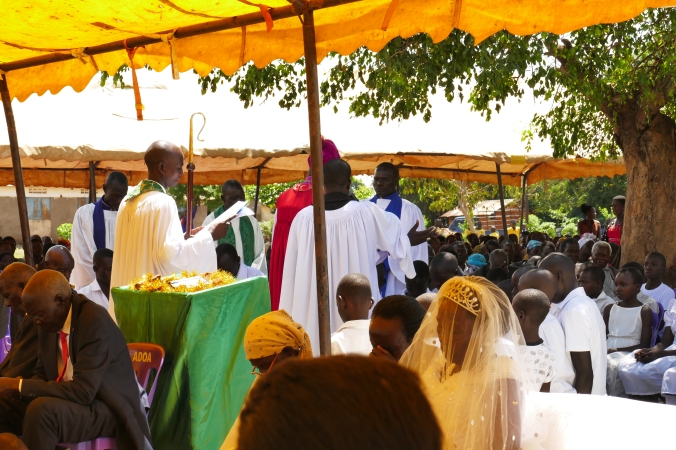 Michael Onyege had been invited for supper and came on his motorbike with his youngest child (about 3) and an older little girl. I met Michael in 1995 on the mission team I was part of in Serere, with John Omagor and others, and rediscovered him through Facebook just this year! His name rang a bell when it came up as a “suggested friend”, so I used a word search of all my diaries written in Teso and then realised who he was. We haven’t been in touch since 1995, so again, there was a lot to catch up on.

Michael is now a Head Teacher of a government secondary school. He was very knowledgeable about Brexit, and British and European politics – and shocked by what is going on. He feels Britain has lost all credibility in the world and will never again be a significant world player.

We had supper and the two children fell asleep. He had to wake them up and take them out into the rain to take them home on his motorcycle.

I will try posting this now before continuing with the last three days…….