Having left home eight days ago, I have finally got internet access. We are now settling in to Edith’s Home Guest House in Ngora.

We were wakened early on our first morning (Thursday 1st Nov) in Entebbe by a terrific tropical thunder storm which lasted many hours! Instead of leaving at 7.30am to go out on Lake Victoria, we had to wait until midday. It took an hour by boat to reach Mabamba Swamp – and there was a Shoebill, patiently waiting for us! There were many other birds, including two new ones for me…….

Robert arrived to collect us on Friday, having already collected Sam and Margaret Opol and their five year old twins, Apio and Ocen, to travel with us. We arrived in the early afternoon at Ziwa Rhino Sanctuary (Nakasongole) where a successful breeding programme is reintroducing white rhinos which became extinct in Uganda in 1983. We were taken on a guided walk through the bush to look for some of the 23 they now have roaming wild – and soon saw our first female and her 8 month old baby. It wasn’t long before we saw another two mothers and their young ones. 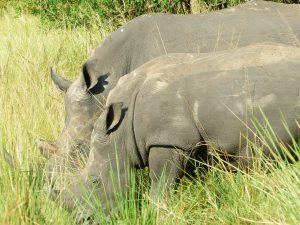 We drove north west on Saturday from Ziwa to Pakwach, a small town on the Nile just a mile from Murchison Falls National Park. Everyone was fascinated to watch an elderly male elephant pulling up grass with his trunk in a marshy area right by the road, washing the mud off the roots before shoving it into his mouth. 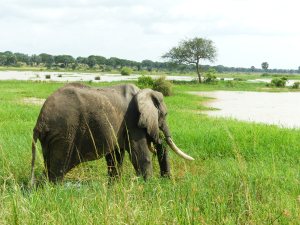 We set off in the rain on Sunday morning to go into the Park soon after 6.00 am, taking with us a picnic breakfast. Fortunately, the rain soon stopped and the sun broke through the clouds. Robert lifted up the roof and excitement mounted as everyone started spotting their first bushbuck and monkeys, then giraffes, hartebeest, oribi, Uganda Kob, waterbuck, warthogs – and elephants. We discovered that giraffes not only have long necks, but also very long, ‘prehensile’ tongues just right for picking those juicy leaves off thorny trees! 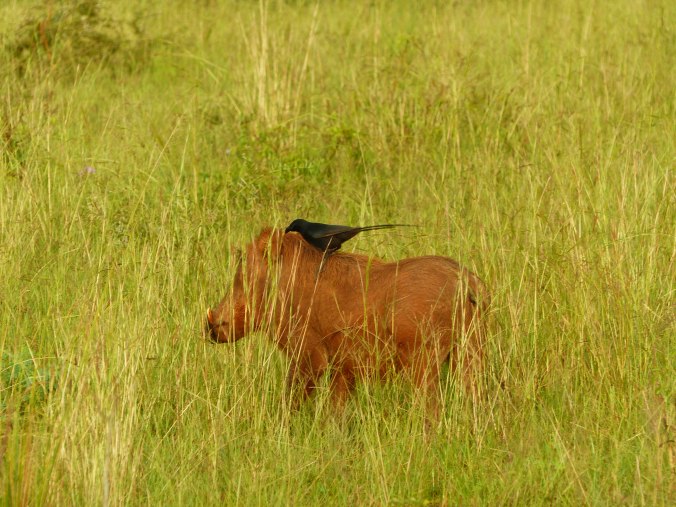 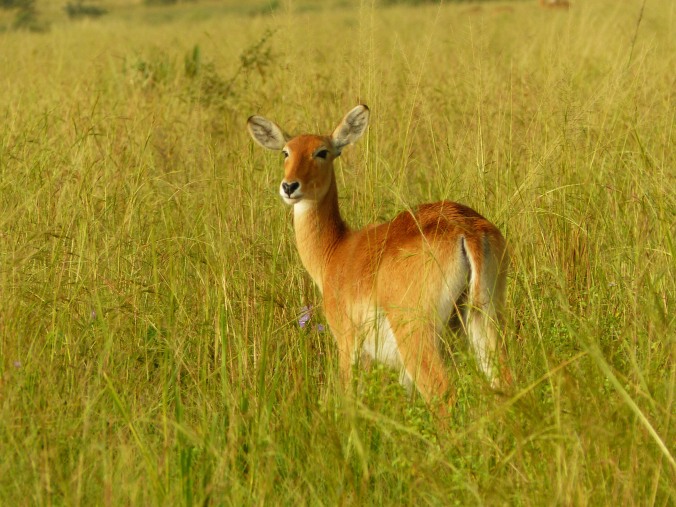 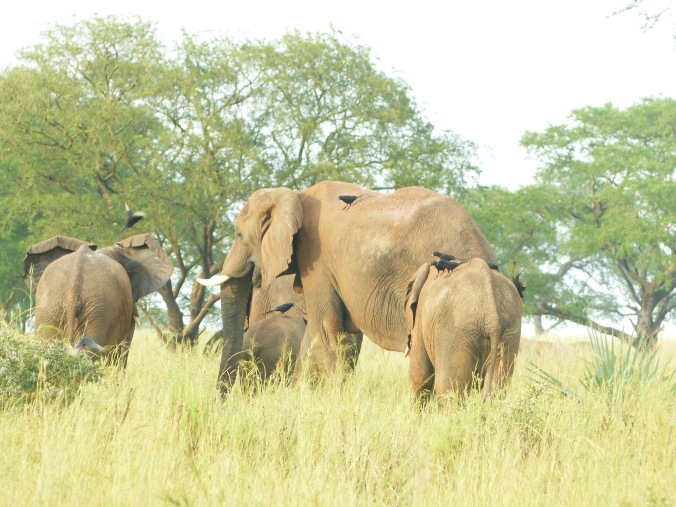 There were also many lovely birds, including Uganda’s national emblem, the Crowned Crane. We enjoyed breakfast by the “hippo pool”, an inlet off the Nile which flows out of Lake Albert soon after it flows into the lake! 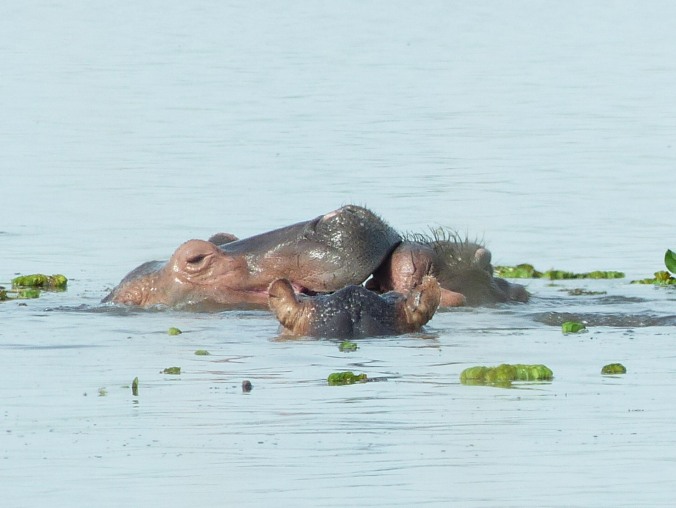 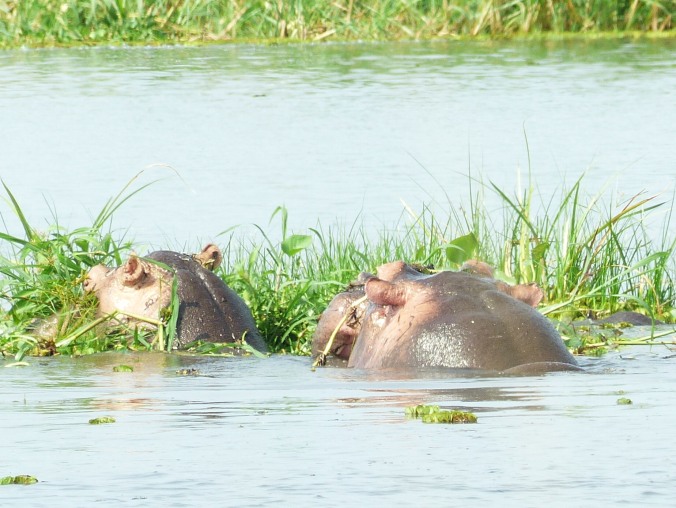 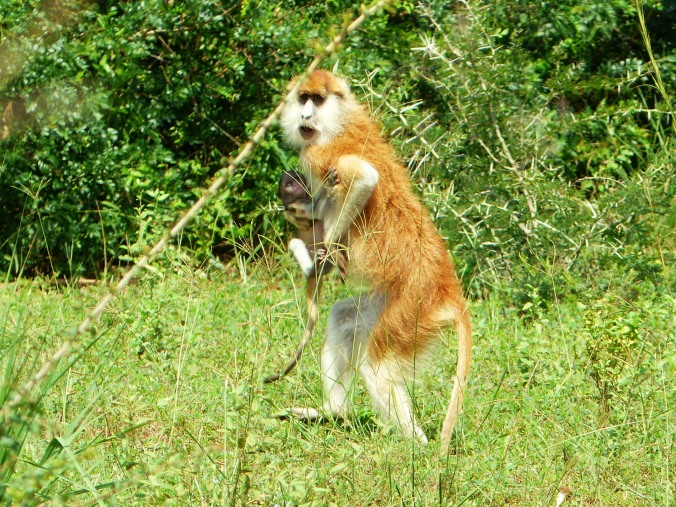 Driving on through the Park towards the Nile at Paraa Lodge, we were treated to a rare sighting of a hyaena which was wandering along the road and before wallowing in a muddy pool right beside us, behaviour Robert has never seen before. 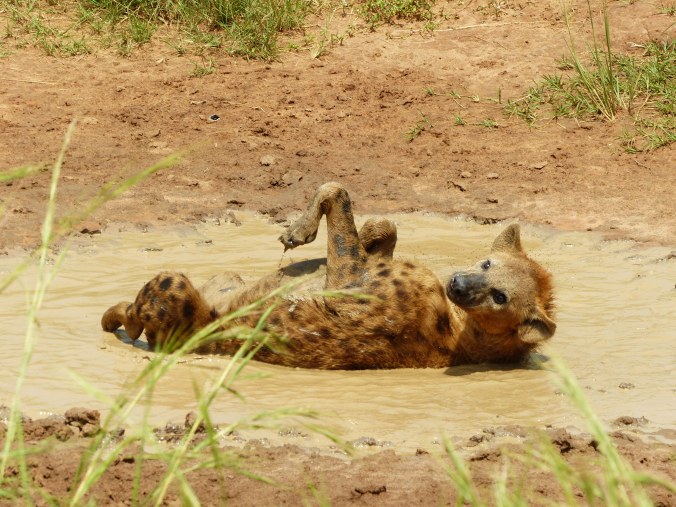 The highlight for Sam, Margaret, Roz and the twins was the 3 hour boat trip up the Nile towards Murchison Falls which gave them good views of elephants, hippos and crocodiles. Robert and I relaxed in Paraa Lodge and caught up on each other’s news.

Roz, the twins and Margaret on the boat 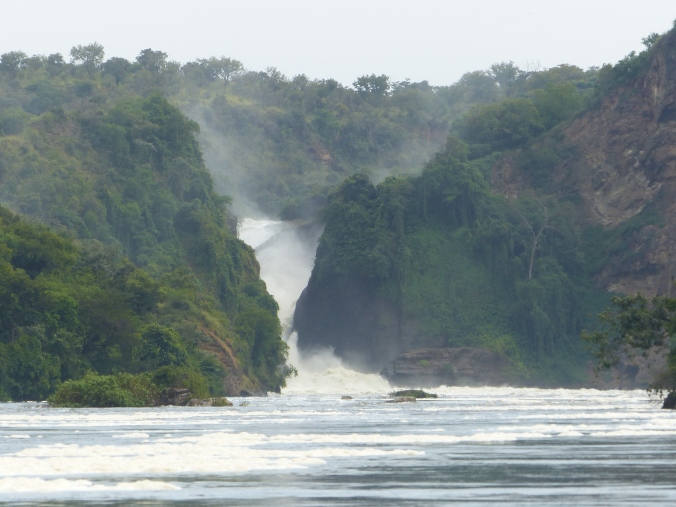 Do I hear you ask: “I didn’t realise you were having a holiday touring Uganda”?! No, that isn’t the purpose of our visit! But I usually manage a visit to Murchison Falls as it is one way of travelling from Entebbe to Teso, albeit somewhat longer. And it was the only way to spend time with the Opol family. The fact that none of them had ever seen the wildlife in their own country was a bonus. And Robert is an extremely knowledgeable guide.

On Monday, we drove eastwards from Pakwach, through Lira, to Teso. We had hoped to visit Milfred Ajuo at her Nursing School in Apac on the way, but there wasn’t time.

We left Sam in Soroti to catch the overnight bus to Nairobi and briefly met Naphtali Opwata and Abraham Eruku outside the cathedral. We then continued to Serere where Sam and Margaret originate from and where they have set up a nursery and primary school (mixed boys and girls, day and boarding) on top of a rocky hill with wonderful views all around, including Lake Kyoga in the far distance. We were treated to some lovely dancing by the children, followed by tea before we went half way down the hill to the Opols’ home where we stayed two nights.

Sam and Margaret have a vision for a school that is different from the majority of schools here and are looking for volunteers to come and share ideas – anyone interested for June next year?! Over the past 10 years, Margaret has also developed a Homestay programme for American theology students who come for a semester of study at Mukono Christian University where Sam teaches. She is keen to help develop homestay opportunities for Ben’s Homestead Tours and Safaris.

Yesterday, Margaret took us to the Lake Kyoga and the hills of Bugondo where they have a bit of land for growing oranges. We went down to the landing stage where a small boat takes people (and cows, motorbikes etc) across to Kaberamaido. We visited some of Sam’s relatives where Margaret helped prepare lunch while one of them took us up the hill. However, it is a deceptively steep, high, rocky hill, so we only managed about a quarter of the way up in the equatorial midday sun!! But it was enough to get lovely views of Kaberamaido on the other side of Lake Kyoga.  We had a lovely lunch of vegetables, including ebo (greens) in a groundnut sauce, sitting in a relatively cool (compared with walking up the hill!) grass-thatched ‘hut’. In preparation for our visit, the floor had been recently smeared with cow dung, the equivalent to us dusting and vacuuming the house before visitors come for lunch.

We had lunch in the homestead in the foreground

We picked bucketfuls of oranges, some of which Margaret gave us to bring with us. The children in the school will get the rest. Margaret cultivates (with help) a lot of land to give the school children fresh vegetables and eggs.

We left Margaret’s home mid-morning today (Wednesday) and drove east on murram roads to Ngora. We stopped on the way to visit the home where the five year old daughter of one of our old students, Ikwenyu Angela Rose, a teacher, lives with one of Ikwenyu’s uncles and family. Ikwenyu died after giving birth due to haemorrhaging (with no blood available for her). The little girl, Ilemu Angela, had gone to stay with an aunt, but we spent time with the family who have six children of their own. Ilemu is due to start in nursery school in February.

After lunch in the Guest House (cooked by Josephine who has looked after us on so many occasions in Ngora over the years), we went to Ngora Hospital and met Dr Amos Odit, the new Medical Superintendent, a paediatrician. He  comes from Aciisa and was born in the hospital himself in 1959 and did some of his training there 30 years ago. He was so concerned about the state of the hospital that he agreed to come for two years to try and turn things around. When he retires, he will come back and help again. He showed us all round the hospital. He is very much looking forward to having three of Becky’s medical student friends in February who are coming for their final year elective and are going to do a project and provide training on the importance of taking regular vital readings. We gave him most of the baby clothes and blankets that various people have given and made for Roz and me to bring out. We will go back on Friday and see the babies and children who will have been given some of them. He will keep the rest for people who have little or nothing in the weeks ahead.

As we got back to the Guest House, John Omagor arrived just to say hallo to us, which was lovely.

Those of you who have enjoyed Josephine’s cooking before will not be surprised to know that Roz also appreciates the way she cooks “Irish” potatoes!

There is a boxing and kick boxing training course going on in the Guest House for young women and men run by Uganda’s international woman champion and an army officer. I wasn’t very happy when I heard a girl screaming and crying in great distress this evening, so went to investigate. I was told they were all “receiving treatment” – ie: massage with some sort of liniment. Since he also had a cane in his hand, I wondered what exactly had been going on, but I heard no more crying after that.

Now that I have a modem which is working, I hope to keep you updated a bit more frequently.