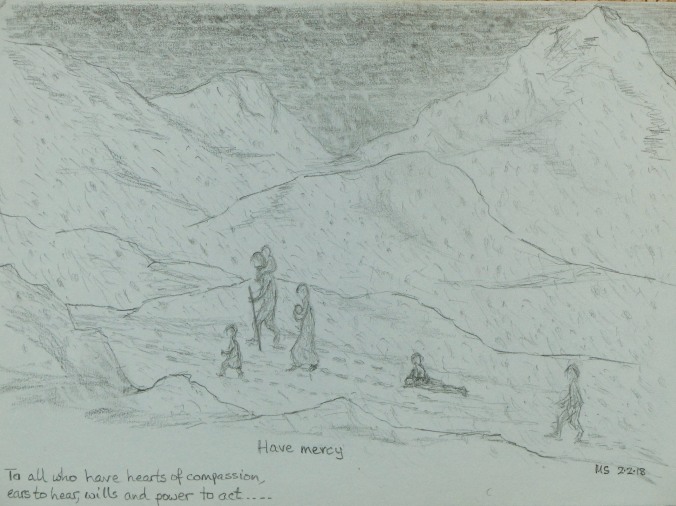 Syrian Refugees Freeze to Death Crossing the Mountains into Lebanon

This appalling tragedy moved me to spend time today prayerfully drawing how I imagined what happened. A sudden drop in temperatures has stretched across the Bekaa Valley, where over 357,000 Syrian refugees have set up camp. They live in tents that are made out of plastic sheeting, which does little to protect them from the freezing weather and rain.

A number of Syrian refugees who tried to flee into Lebanon across the snowy mountains have been found dead in the snow. Fifteen bodies, including children, have been uncovered so far after Lebanese soldiers stumbled upon the tragic scene following a fierce winter storm. They were in time to rescue a few of the group, including a young boy who had strayed from the path. They had been led by people smugglers.

Since the Syrian conflict began seven years ago, the Lebanese government has taken in almost 1.5 million registered Syrian refugees. However, the UN says funds to support the wave of migrants are dangerously low. Syrians now wanting to enter Lebanon must prove to Lebanese authorities they have reasons to be in Lebanon, such as property ownership, an embassy appointment, or a residency permit. For many Syrians fleeing war in their country, securing residency or work permits is impossible. Many refugees are in Lebanon illegally and face arrest if discovered.

I heard on the radio this morning about a 3 year old girl who is in a Lebanese hospital suffering from frostbite and slipping in and out of consciousness. Most of her family died in the mountains.