Ten days ago, I asked Ugandans on Twitter what they would like to say to us in the West about the current situation and what we can do.

This is what some of them said:

1.  Dear friends of Uganda. Thanks for funding for so many years. But sorry, no development because Museveni is killing Ugandans.

2.  When you have time, listen to Dr Lina Zedriga Waru Abuku’s story: https://www.youtube.com/watch?v=sOvavcJCo2Q in Uganda. [To mark her one-year anniversary as Vice President of the National Unity Platform (NUP), this interview was given on 8th April 2021. There are sub-titles if needed.]

For more about Dr Lina Zedriga Waru Abuku, also see:  http://www.auschwitzinstitute.org/profiles-in-prevention/lina-zedriga-waru-abuku/. She is an inspiring woman. With people like her and Bobi Wine at the helm, Uganda has the potential to be restored to peace, justice and democracy.]

3.  Put the human rights violations in Uganda on the agenda of the UK Parliament. Bring pressure to bear on James Duddridge and Dominic Raab to address the issue of human rights!

4.  Demand for immediate release of arrested, kidnapped and abducted people

5.  Don’t forget to address the rampant human rights abuses, state inspired kidnaps, detentions & murders of HE Bobi Wine supporters. What age and country are we living in where people are locked up indeterminately, tried in a court martial for supporting a leader of their choice?!

6.  Stop using [UK] tax payers money to support projects in Uganda with dictator controlling everything. Ugandans need a democratic gov’t before any aid.

7.  Please let your Association officially ask these MPs, D Raab and J Duddridge, to defend democracy and condemn human rights abuses in Uganda. They can also use their position to ask Mr. Museveni to step down, since he lost elections.

8.  The head of Uganda Police says his statement about beating journalists for their own good was a joke! But the impunity continues.

9.  Uganda is demanding answers on the mysterious deaths of our religious leaders! Also the rampant abductions, torture & murder of ordinary citizens!

10.  Help us demand for our political prisoners. Save our Religious leaders, they are dying mysterious death. There is a genocide underway.

11.  In short, UK politicians should not allow themselves to be accomplices to crime. The Church of England should use its influence to help lobby for freedom of all prisoners of conscience in Uganda, including HE Bobi Wine’s campaign team languishing in jail since December 30. No bail!

12.  We have a lot to tell them but most importantly, human right abuses in Uganda is the critical issue that we are yearning  to get solved, the bleeding Uganda is in tears and we need to be saved, 1,000s of Ugandans are dead, others are in torture chambers for no crimes committed.

13.  Ugandans are mourning for the Catholic ArchBishop who was killed by the current govt. ArchBishop Sentamu should stop supporting Museveni who is making Uganda a laughingstock.

14.  May God bless you beyond measure for being your Ugandan brother and sister’s keeper. The [UK] Church needs to stand up for Human Rights and justice in Uganda – it’s a Christian duty. Hold regime accountable for all suspicious deaths including those of religious leaders.

15.  USA Stop dealing with dictatorship government please, don’t cause more pain to us Ugandans. We have suffered enough, death is our daily food, kidnapping, torture is part of life now! Dictator Museveni has caused Ugandans much pain.

16.  “Safe houses” are euphemistically names for torture centers for the Museveni regime in Uganda. Hundreds of Ugandans are reported to be in “safe houses”.

17.  Stop the killing of Ugandans and religious leaders, release all political prisoners, independent investigations on the death of Dr Bishop Kizito Lwanga, Museveni must leave power and hand it over to HE Kyagulanyi who was voted.

18.  You are the first person from UK I am seeing with genuine love for humanity and trying to seek justice and fairness in the affairs of our beloved country Uganda. Stay forever blessed. Museveni and family are not human but hide under Christianity to be viewed differently.

19.  Thousands of people have either been abducted, killed (dumped into lakes/rivers), are in torture houses to this moment,-even those 16yrs old are picked either during day/night by Museveni.

20.  The present situation is not tolerable. Church leaders are intimidated to remain silence. Activists still in jail, fates of disappeared are unknown. You can show solidarity with Ugandans, speak up, support actions to return democracy and rule of law to Uganda.

21.  USA leader of free world and world police why not #StandWithUganda who are under ruthless dictatorship with gross human rights abuses. Don’t impose M7 on us through funding him.

22.  Advise Museveni to end the murder of Ugandans and all opinion leaders in the country. We are tired of their actions of murdering citizens because of greed for power. HE Bobi Wine won the elections and killing innocent Ugandans for seeking better governance should stop.

23.  We can hold guns but we choose peace, therefore we call upon all peace lovers to stand with us.

24.  Ugandans are being abducted, raped, tortured and illegally detained yet Church of Uganda and its Mother Church leaders are silent. Those who choose to be silent when the people are oppressed have chosen the side of the oppressor.

25.  Ugandans are in pain, their sons & daughters are in prison 4 supporting someone they relate 2. The tortures scare me to go back 2 my country. The pain is too much that I struggle 2 watch some of the videos of the young people. Museveni must go. Ugandans did not vote for him.

26.  Helen Grant MP, we hope that on your return, you will inform the Prime Minister and Foreign Secretary, that, apart from aid, UK must take strong stance toward Museveni for abuses. ‘Global Britain’ without support for human rights is empty slogan. [Helen Grant, Prime Minister’s Special Envoy for Girls’ Education, visited Uganda at the end of March 2021] (https://www.gov.uk/government/people/helen-grant).

PETITION UPDATE
The Petition to the United Nations Human Rights Council has reached 1,631 signatories.
This is good, but not enough to make any real impact. The vast majority of people signing are Ugandans. I find it disappointing and sad that so few people of other nationalities seem to know or care enough to try and do something to stop the ongoing human rights abuses in Uganda. Having not been active online over the past week, only seven new people have signed! I can’t keep the pressure up.
Any ideas about what we can do to publicise it more widely and encourage many more people to sign? Making a donation to Change.org by clicking on “Promote this petition” would be a great help. 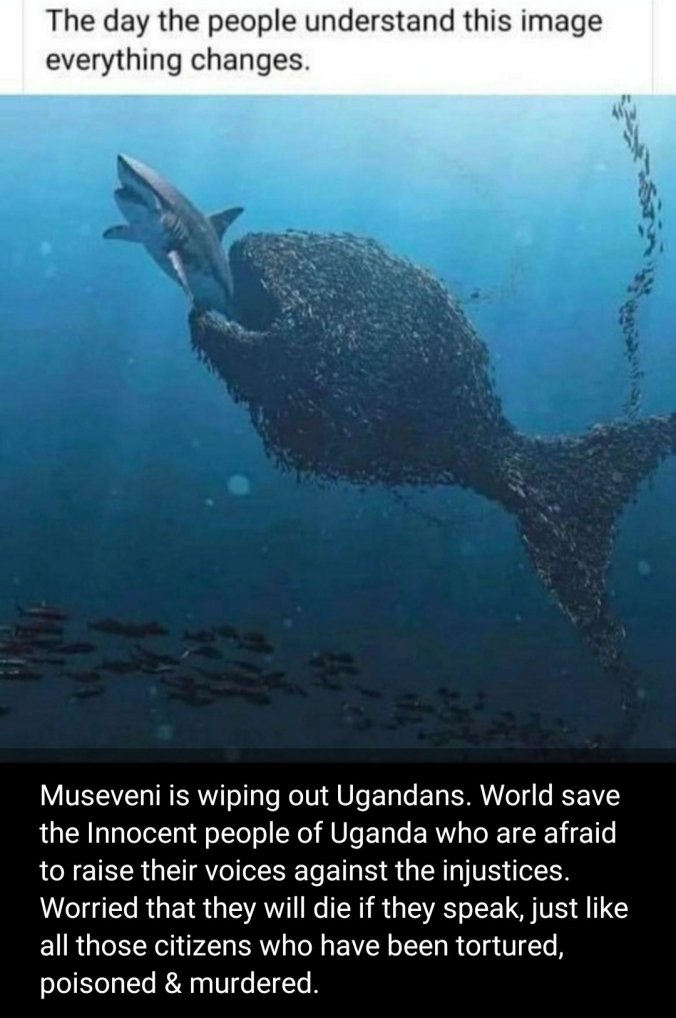 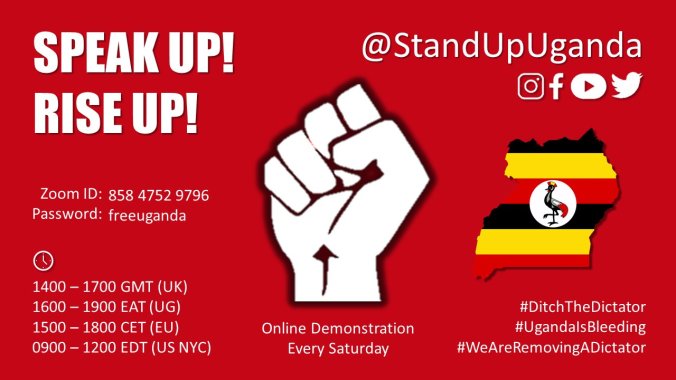 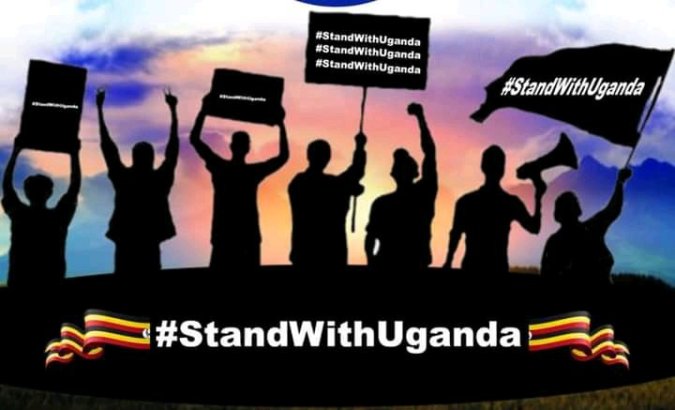 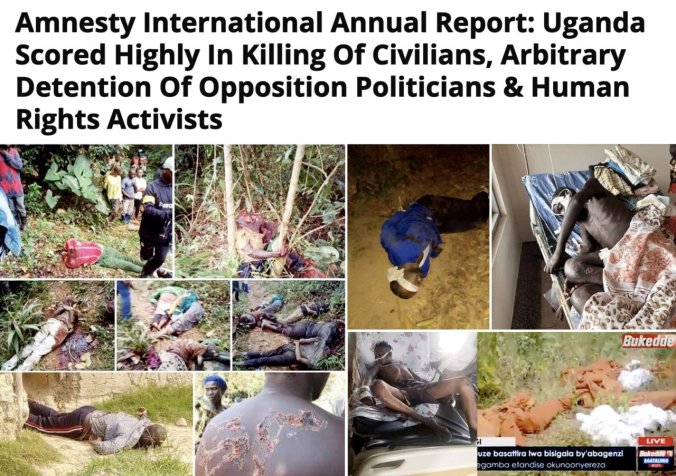 2 thoughts on “LISTEN TO UGANDANS”